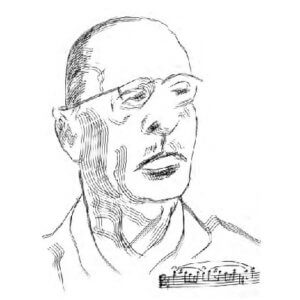 So the genesis of this little piece is the Brewer’s Arms photographs from a couple of weeks ago. I don’t remember exactly how it happened, but I’d had a minor interaction with Martin on Twitter messaging; we ended up talking about band history and archival, and how he preferred to let all of that flow silently into the past, and we touched a little on art and artists and some vaguely related subjects. I’d enjoyed the conversation, and when the photos turned up I thought it was worth tipping him the wink to see if I could make him maybe just a little more nostalgic.

There ensued another brief conversational flurry, during which I said I thought the band at that period was a cracking live proposition, and in particular hoped that the song “Igor Stravinsky” would somehow make it out to the world. And he replied to that with a link to a gallery catalogue and no further explanation.

Quite a long catalogue it was too, and I paged slowly through it wondering what it all meant. There is some really nice stuff in it too by loads of contributors, it’s a mixed collection including paintings, some very nice artisanal jewellery, and suchlike; anyway I eventually came across the page for a screen-print of a portrait of Igor Stravinsky, an edition of just 20 by Feliks Culpa.

Now most of us probably now know that Culpa is Martin’s artist alter ego, and he’s been doing a few exhibitions recently. Culpa is somewhat conceptual, in that there is an underlying binding theme around the exhibitions, for example drawing of frames from Hitchcock’s “The Birds” done regularly, every day in 2013. A sort of celebration of the discipline and work ethic needed to sit down and do something every day regardless of circumstances, and the very scale and mass of the work makes it something more than the sum of its parts. At that time, I did think of buying something, but I just felt that one piece taken out of the conceptual context would be a little pointless. I really liked the idea though.

And so to Igor Stravinsky. Martin explained that the portrait had been done with a Stravigor, which is the almost eponymous device Stravinsky devised to draw staves wherever he happened to be (or at least a modern derivative of it). It’s obvious when you know, but as soon as you know, the concept becomes beautifully elegant, self-contained and neat.

Of course Stravinsky was also a part of the history of Prefab Sprout. To quote Paddy from the 2009 Avclub interview:

“And we loved Igor Stravinsky. Here was classical music that didn’t sound quaint. The coda to “The Firebird Suite”? I thought that we might sound like that. Why? I don’t know. There was just an attitude, or a colour in the music that I wanted to get close to. I thought I heard the same thing in “Marquee Moon,” by Television. (Is Tom Verlaine a fan of Igor?)

“Do you want more on this subject? I’m much happier talking about someone else’s music than my own. One of our earliest songs was actually called “Igor Stravinsky.” That’s how keen we were on him. We loved “The Rite Of Spring” and “Petrushka.” I realize that it sounds presumptuous and ludicrous, but the experience of hearing these records coloured my own writing enormously. You might not hear it, you may even think I’m teasing you. But straight from the heart, it was nourishing.”

“Igor was something else – probably the Rite and its legend / trying to count the beats etc the intro and Jaco Pastorius’ constant referencing and his association with Modernism, Picasso’s ballets etc and Debussy, Ravel & Satie and Boulez and Robert Craft’s essays. It was his melodies but also his palette of sounds and the dissonances / chords – trying to recreate his orchestral breadth with just six strings – ridiculous but inspiring – Symphony of psalms – symphony of wind instruments – never tire of them.”

He also mentioned less prosaically that the early attempts had mostly ended up looking like Homer Simpson, which given the need to wrestle with the stravigor I can completely understand.

Anyway, I love everything about this idea. Not so much because of the Prefab Sprout connection, though that’s part of it, much more because of the perfect symmetry of the idea behind it. Didn’t take much to decide to get my chequebook out, and a copy has duly been acquired for the Empire. It arrived this morning and I couldn’t be more delighted with it.

Should anyone else be so inclined, the catalogue is from Gallagher & Turner in Newcastle, and the print is on display in their current exhibition running up to October 5th.

I’m not kidding about Igor Stravinsky the song, either. It rocks along like stink, it’s really a shame it didn’t make it to a B side like some of the others of the period, “Dandy of the Danube”, “Tin Can Pot” and so on. Hopefully one day it will see the light of day.