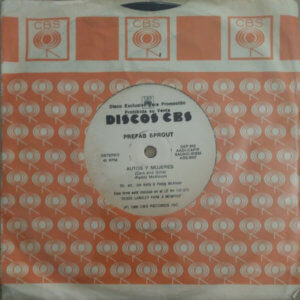 10. First Pressing of “The Devil Has All the Best Tunes”
9.   Japanese Pressing of “Steve McQueen”
8.   “Jordan: the Highlights”

No. 7 is a perfectly irresistible item. At least it is for me.

Anyone who has seen “Toy Story 3” will know that at a certain point in the story, Buzz Lightyear is forced to undergo a factory reset, during which he is flipped into “Spanish Mode”, with hilarious consequences. And that’s sort of what we have here.

I’ve always been a bit of a sucker for foreign language pop memorabila. It probably comes from the time when I used to read the back of Record Mirror and see actual foreign language material on sale from specialist record dealers by Abba, Kate Bush, Peter Gabriel, even Boney M.  Not that I bought any, but there was something in the fact these things even existed that stretched my perception of the scale of the musical universe. Certainly, from the very moment I saw this on Bedford Macintosh’s Sprout site (now long gone), it flooded some sort of dopamine receptor, and I instantly coveted it.

Now sadly we are not going to see Paddy, moustachioed, in a toreador outfit, buttocks clenched in tight trousers, his arm curled over his head, whilst on tiptoe he dances passionately around a Flamenco-fied Wendy, all swirling dress, dark hair and clicking castanets, to the sound of a Spanish guitar adding a fiery chorus to the Langley classics, such as “Nancy (Dejame Tus Cabellos)” or “Toco Madera” .

(I know it really ought to be an Argentinian tango, but we can maybe save that for the B side.)

Alas, this is really just the standard English versions of “Cars and Girls” and “The King of Rock ‘N’ Roll”. ¡Oh, que oportunidad dejaron pasar ahi!

But even so, it’s a very nice and unusual item. And not by any means difficult to find, I think someone in Argentina had a box of them because they often appeared fairly inexpensively on Mercado Libre Argentina, an Ebay-like auction site which is unfortunately very difficult to buy from because it needs a locally registered credit card (there are some people on Ebay offering purchase services but I’ve never used them). It also appears fairly regularly on Ebay, Discogs, EIL and so on. If you keep your eyes open you should be able to find one for something like £20-40.