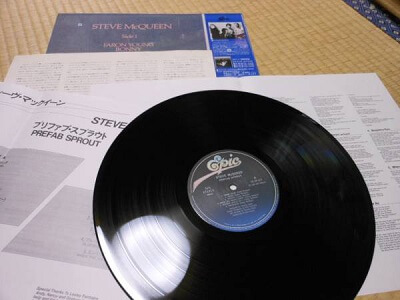 Here is the Top Ten so far (such as it is, and if you’re not humming the Alan Freeman “Pick of the Pops” music, kindly leave the blog).

10. First Pressing of “The Devil Has All the Best Tunes”

Japan has always been a great Prefab Sprout stronghold, and the only place outside Europe the band ever played, as part of the “New Artist Showcase” in July 1986. Paddy also visited Japan in December 1999 for a promotional tour for the 38 Carat Collection.

The presentation of Prefab Sprout material in Japan is always extremely good. It’s very much a premium market, and they don’t cut corners on cost. This is true right across everything I’ve ever bought from Japan, even most of the rock magazines, some of which are absolutely sumptuous. Having said that, Japan moved very quickly to CD as the preferred format, so only “Swoon” and “Steve McQueen” made it to vinyl as albums. 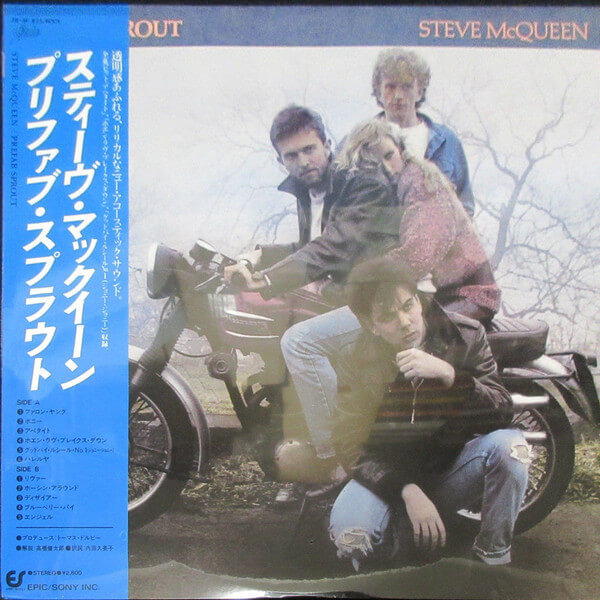 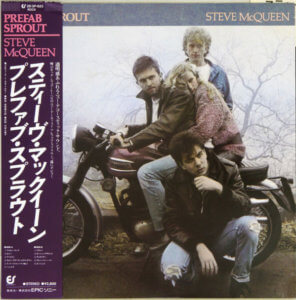 Anyway as is customary with Japanese records, we start with the Obi strip, which is the paper strip thing on the front, usually with the price and some other information. It’s essential when collecting Japanese material that you have one of these, and for Steve McQueen, you have a choice of two: purple or blue. I would say that the purple one is the more aesthetically pleasing, and is also the earlier one. The Obi was changed to blue as part of the New Artist Showcase promotion, during which Swoon was also issued. Apart from the Obi, everything, packaging and pressing, is identical. The price was 2800 Yen, which given the exchange rate at the time was about £9.

Inside the sleeve, as is usual with Japanese material, you get an additional insert, which is the lyric sheet and liner notes, written by Kentaro Ishibashi. You don’t get the illustrated inner however. 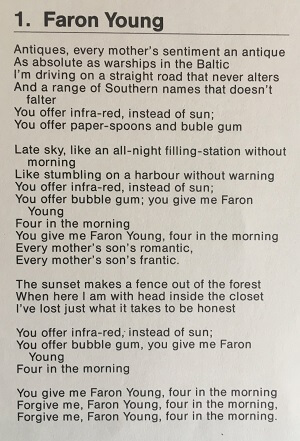 The English lyrics to “Faron Young” somehow manage to leave out the “Pearl Harbor” reference, suggesting it is just  “A Harbour”, and were definitely not provided by Paddy directly – you can imagine someone at Sony Japan scratching their heads over the words and taking wild guesses, but mostly they got things right. A quick OCR scan and Google translate of the insert reveals a set of well-informed liner notes, contextualising the band against the frame of the English music scene at the time, including Aztec Camera and the Postcard bands, Lloyd Cole, the Lotus Eaters; but also Dexy’s and so on. There’s also a potted history of Kitchenware records. The UK and the recession afflicted Northern regions must have seemed extremely remote and mysterious to the Japanese record buying public in those pre-Internet days.

And then the vinyl itself. You get a decent wodge of plastic, about 130g according to the kitchen scales.  Now whether this is the best pressing is an interesting question. The recent Steve McQueen 180g vinyl repressing is my “go to” copy, mostly because it only costs £20, sounds absolutely incredible (despite my initial cynicism about 180g pressings and vinyl in general) and is readily available, so scrawping it accidently with a careless flick of the stylus is less of a painful thought than would be transforming a tons worth of Japanese collectible from NM to VG+. But it’s in the top two, and the best commercial pressing from the period by some distance.

Expect to pay somewhere between £50 to £100 for a copy as a guide, generally the ticket price will be less in Japan than the UK (in Japan they prize the UK releases more, go figure). It can often be found on Yahoo Auctions Japan (here’s a convenient link for the Japanese form of the name and you can also just type in “Prefab Sprout” for a slightly different selection), and also worth scanning Rakuten.

The “Buyee” service usually appears in a banner at the top of the page for Yahoo auctions, and allows a bid and purchase. But bear in mind that LPs are NOT zero rated for import duty and you will have some additional costs on import (and Buyee adds a chunk too).

I use Buyee quite a lot, and it works well – be careful to understand the options for service types, as they range from zero to about double the cost of a low cost item depending on how much insurance you want. When you win, after a few days they contact you to ask for shipping instructions, and the one I usually use for that is a quick airmail service which is tracked and only takes a couple of days. You can also consolidate packages with several purchases, which I do when I buy magazines and bits and bobs.

In Europe you’ll find it from time to time on Ebay, and via Discogs and so on.  Just keep your eyes open.

As an aside, “Swoon” is also available, has an equally nice presentation, but is usually a lot cheaper.  There’s also a very cute little release of “When Love Breaks Down” from Japan which turns up quite regularly on Ebay. Worth keeping an eye on, as when you have one Japanese pressing, you will want more.