UPDATE: this recording is now improved. Due to an error in the digitisation process it was previously mostly mono. Now presented in Stereo, and if it was good before, it is brilliant now. Seriously. 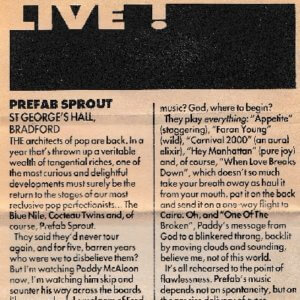 It’s been quite a long time since a “new” live tape appeared, so this would have been a marvellous discovery even were it not for the fact that it’s an amazingly good one.

This came out of a discussion on the Facebook “Prefab Sprout and Paddy Mcaloon” page, where someone was asking about Sprout gigs people had been to. There were a curiously high number of people who had been to the 1990 gig in St George’s Hall, Bradford. And amongst those, Rob, who had a tape of the concert, recorded with a Walkman with mikes dangling over the balcony.

The result is a really excellent recording. Minimal crowd chatter because of the mike location, and great sound. “One of the Broken” is split by a tape flip, “Cars and Girls” and “When Love Breaks Down” are both truncated because of lack of remaining tape, and “Doo Wop in Harlem” is missing for the same reason.

And should this find anyone with other tapes or minidisks of gigs, please do get in touch.