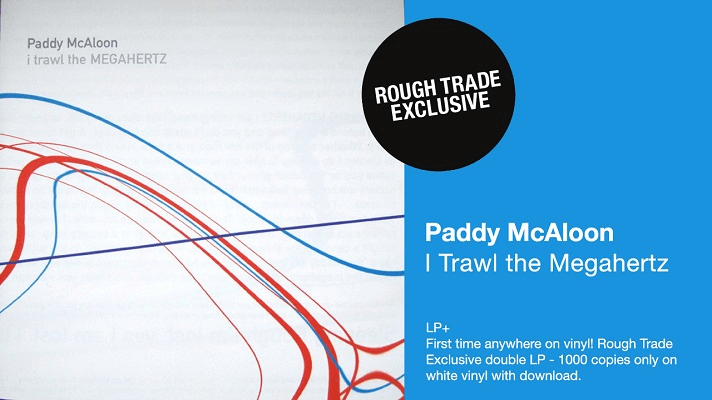 When “I Trawl the Megahertz”, Paddy McAloon’s sublime musing on the tragic fragility and beauty of the human condition, was released in 2003, it was met with confusion and indifference.

He had been talked out of releasing it as a Prefab Sprout album. Because for anyone who was expecting “Cars and Girls”, it would have been a hell of a shock. A title track twenty two minutes long – as long as it’s possible to get into an Atari ST midi sequencer – with no hooks, and an American female voice floating soft words across a looping backdrop of gentle ambient music. And then the second section of jaunty instrumentals and sampled voices from the radio. Before, finally, just one song with Paddy singing, prescient and touching, of growing a long and silver beard and escaping his obligations to sleep amongst the trees.

Even diehard fans were confused and in some cases vocally dismissive. And although Paddy did a little press, the release passed almost unnoticed by the musical world. Famously, he was disappointed that the Guardian chose not to review it. And so the album disappeared into obscurity for a time, a little side note in the McAloon canon. Yet this was a hugely personal record for him, one he had unusually himself pushed to release, and it must have been a hammer blow to see it fall flat.

There’s much that can be said about the album, how it was written in the velvet darkness post eye surgery when the imagination is at its most receptive to the stories that emerge from shortwave radio; how David McGuinness miraculously found ways to inexpensively add real orchestration to add warmth and texture; how Yvonne Connors had recorded her part with Paddy in a London hotel room, and how he laboriously edited out the background noise from the mini-disk copy because the “proper” recording was lacking something indefinable; how the second section forms a concept piece called “Sleeping Rough” about an industrialist, who in losing everything gains the world.

But what I want to say about it is more personal.

I came across it when my second phase of Sprout fandom started, around 2008. I bought it out of curiosity – at the time sellers could barely give it away, and I was later to pick up a signed copy of the CD for peanuts. Now I was in the process of becoming divorced (I was not yet 49), I was missing my children, and in a highly emotionally fragile state. So I put it on to play, and after a little preamble, a voice said “Your daddy loves you. Your daddy loves you very much. He just doesn’t want to live with us any more.”

Immediately a flood of tears broke. It was as if everything I had pent up until then had just found a release.

Sobbing uncontrollably, I somehow made it through the rest of the piece. Lines would fade in and out of focus, would burst forth in brilliant moments of clarity, and all the while this swirling, slightly synthetic, idiosyncratic ambient loop was soothing the harshness of this woman’s story of love, loss and despair.

It’s funny. I’m listening again, and it’s doing the same thing. Ten years on, and with my life settled and content, this piece of music still knows where my raw spots are, and pokes and comforts them simultaneously.

In the 1970s, I would sit down in the evenings when my homework was done with a short wave radio, and just scan for things in the static and background electronic warbling. It was comforting to listen to a huge world beyond the narrow boundaries of my own teenage self, where Russian propagandists would monotonously intone documentaries about tractor factories, where you would hear the zeal and activity of American preachers. Or mysterious lists of numbers, or a static soundscape which the late night would blur into nearly comprehensible whispers. That idea is I think what lies at the heart of this piece: you are given an imperfect view of a greater reality revealed in little snippets. You’re suspended, detached, turning the dial and hearing the story emerge. Paddy spoke a little of this in the recent radio documentary with Jarvis Cocker.

And so I’ve loved this record from the first. To the point where, when I was listening endlessly, obsessively, to the other Prefab Sprout records I would consciously and deliberately not listen to this piece. Because I didn’t want familiarity with it to dull its impact. I ration it to myself. I can still be surprised by a line I’d half forgotten.

Little by little, and as was the case with most things connected to Prefab Sprout in recent years, other people discovered the album and interest snowballed. The prices for second hand CDs started going up, to the point where you would be unlikely to get change from forty quid for it. This wasn’t hurt by the fact that half of the original release had the ill-judged Sony rootkit virus PC copy protection system on, and so were actually dangerous to play in some contexts.

And the clamour for a new-release grew. I get a lot of emails from people trying to contact Paddy, and offering to finance the re-release of “I Trawl the Megahertz” on vinyl. I explain that this is a fan site and I can’t contact him, I attempt to point people at the place I last found Keith Armstrong, I hear rumours that something is happening. But it’s cotton in a blizzard, a plane going down behind enemy lines. Nothing ever comes of it.

Until now. Rough Trade are today opening pre-order of the album as a double vinyl LP, in a limited and exclusive edition of 1000 copies on white vinyl, with deliveries in late January 2019. There will also be a standard edition released by Sony on vinyl and CD at the same time, and I’ll post separately about that. And it will be a Prefab Sprout album, as it really should have been all along. At Paddy’s request: “I thought we could do anything… And Megahertz is true to that spirit. The music here is of a piece with everything I’ve ever written. It’s from the heart.”

This is the most wonderful news, and I’m certain that this will become highly sought after as a collector’s item.  Rough Trade were of course the distributors of the first two Prefab Sprout singles, so it’s very appropriate that they are now carrying the torch for this unique and wonderful release.

Get your copy here.