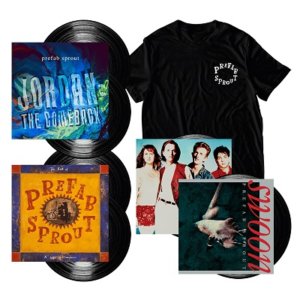 2019 has certainly been a busier year for all things Prefab Sprout than any I can remember since Jordan.

Sproutologically speaking, it all really kicked off for me during a Chinese New Year holiday to the Far East, which coincided with an absolute ton of radio and press interviews around the reissue of “I Trawl the Megahertz”. And I may say that It’s not the easiest thing in the world to get at a stream of North Norfolk Digital or similar when you’re in the middle of the rain forest in Borneo, but via a mixture of VPNs and a lovely little miniature PC bought for the purpose I did manage to bag the lot, and with the special bonus prize of a local Malaysian newspaper which carried a syndicated interview.

Most of this is now accessible one way or another via the interviews page, where you will also find the Paddy video clips from the mid and end of year re-issue schedules. I’ve been returning to the promotional interviews over the holiday period, working on a few translations and so on. Particular highlights in the flurry we were treated to – predictably – were the peerless Sodajerker and Pete Paphides audio interviews, but also we had the first time Paddy has been filmed in full white beard talking, for Newsnight. Wonderful stuff.

I’ve been deluged with questions about what is happening with “Femmes Mythologiques”. And I really haven’t the foggiest – this is a fan site and I have no special knowledge beyond a few contacts who are also at one step removed – but this time last year I said:

“What do we know? There is some chance of a new album around September this year. It may be “Femmes Mythologiques”, and it may contain “Cleopatra” and “Angelina in 3D”. But “many a slip betwixt cup and lip” as the saying goes, and I don’t think I’ll be holding my breath. But there will certainly be the reissue of “I Trawl the Megahertz”, and I understand that there may be something interesting done for Record Store Day, though not new material. There will certainly be further vinyl reissues, and the word is that “Andromeda Heights” is next in line for the treatment.”

Which in the event was mostly bang on the money, but on the subject of the album, this year there have been dark rumours of catastrophic hard disk crashes and lost vocal recordings and I’d say it’s 25/75 at best we’ll see “Femmes Mythologiques” at all given the time that’s passed. Were it the case that a lot of work had been lost, I can easily see Paddy binning the whole thing rather than starting over. But let’s keep the faith until all hope is lost, eh?

What does certainly seem to have gone the way of all flesh is the idea of CD box sets and rarities collections, which came from the Dagbladet interviews (currently in the queue for translation). If I were to hazard a guess, Paddy put the idea out there to try to spur himself into action, but the sorting out and quality control is probably not something he can be bothered with unless he’s forced to.

I suppose the idea behind a lot of the current activity is to transform some of his intangible assets into a form which provides retirement income and something to pass on to his family, but it’s one thing deciding to do that, and quite another actually going through with the tedious donkey-work of doing it. Especially when there’s always another song to write.

On the other hand. it’s good to see Martin being reanimated a bit. In two ways really, firstly he has been closely involved with the promotional campaign for the reissues, and drives the official Prefab Sprout social media accounts at least some of the time, which means there are great photos appearing and the odd little nugget of information – his mailing list piece on Swoon was quite wonderful (now available via the Interviews section). And then as Feliks Culpa he has exhibited and spoken about his own work as a conceptual visual artist. Probably one or two of his “Igor Stravinsky” prints are still available, they are well worth the modest investment as a unique piece of Prefab Sprout related art.

I flaunted some of my top collectables in “Record Collector” magazine in June, and thereby was able to impress my 4yo son by showing a photo of his dad in a copy in W H Smiths at Glasgow airport. I enjoyed that. There hasn’t been a massive amount of collecting happening in truth, I can’t spend what I used to be able to afford, though things are still turning up – I couldn’t resist the white label of the “A Life of Surprises” from a charity auction. On a more modest scale I’ve been working on a much more detailed discography which has identified a few holes in the collection to fill. And the very best thing this year was undoubtably a signed “Megahertz”. whereby hangs a tale you can read at the link. The most mouthwatering new thing I’ve seen but can’t find is some official Thai cassettes, in fact pretty much all of the missing stuff from the collection is cassettes, Brazilian, South African, Japanese and Thai.

2019 sadly saw the final demise of Sproutnet, which I’d taken on from the inestimable Jamie McGarry when he moved on to better things with the Valley Press. I’m making a few changes in my life which have some potential financial knock-on effects, and I could no longer really afford to keep a basically mothballed site alive alongside Sproutology. You can still find it at archive.org though – there’s probably a bit of the binary content missing but most if not all of that has been transferred here, one way or another. The old SproutNet forum is drifting, disconnected, on Tapatalk, but is probably still there somewhere for anyone who cares to google for it.

As for Sproutology, it continues. I feel an increasing pull away into other interests, and updates are certainly less frequent than they were, but there are still discoveries, and I even have a little bit of a backlog to work through, so it will keep chugging away.  The general backdrop has changed though – it’s very rare now to find any video material and YouTube has gone very corporate with most of my uploads having been struck for copyright, and without much off air stuff turning up now. There’s till a bit of audio coming to light here and there, I’m sitting on an Italian concert recording which turned up a few months ago and should emerge before too long. The best video discovery was certainly the ToTP video of “Cowboy Dreams” which was on a Sony mailout VHS cassette found in January.

I mentioned the changes I’m making in my life, and with that in mind, there’s a little PayPal link over to the right for a microdonation. It’ll be a much easier decision to keep things running if I don’t have to worry about the hosting and bandwidth costs, which add up to a few hundred pounds a year. Sincere thanks too to those who have already made donations, these are immensely helpful. Having said all that, I’m not imminently planning to shut things down or anything like that.

Anyway, begging bowl retracted, and what to expect of 2020? Everything really hinges on whether there will be a new album, and the smart money says that the usual progression is of things petering out and a year or two passing – Sony’s launch schedule and budgets don’t work as ad hoc as they may have done in the past so even if the album gets completed, it may be some time before we hear it.