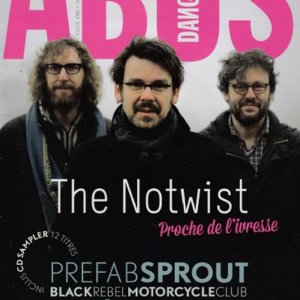 He’s changed physically. The eternal youth with flowing locks now resembles a mischievous Gandalf. But his talent has remained intact. You need only listen to his new album (“Crimson/Red”) to be convinced, to songs such as “The Best Jewel Thief in the World” or “List of Impossible Things”. Disarmingly kind, Paddy McAloon patiently answered the questions we put to him about this Prefab Sprout album.

Your music has always been very original… It’s difficult to find obvious links to other artists. That’s very rare, and a mark of talent…

“Oh thanks, that’s a very generous opening question! [laughs] I try to be original when I write, but I don’t think I’ve been able to escape the music I love. I like a lot of very different styles, and I’d also say that even music I don’t like has probably influenced me, in terms of what not to do. But it’s true that over time, over songs, over albums, you inevitably develop a style of writing, a musical fingerprint that’s your own.”

Yes, absolutely, you’ve created your own musical path, ending up quite a long way from the Beatles and T Rex which you loved when you were young…

“Yes, I adored Marc Bolan when I was thirteen. And Bowie. But since then I’ve loved so many different things, from classical music to pop, via jazz or the blues… I’m a fan of Howlin’ Wolf for example. Or Captain Beefheart of whom I’m an enormous fan.”

On this new album, you also pay tribute to the folk singer, Jimmy Webb, in “The Songs of Danny Galway”…

“That’s above all a song about the power of music, about its importance in our lives. I wanted to do a song about the musicians who have changed our lives, who have moved us. It could have been a song inspired by Bob Dylan, or any of those who have touched us. So I was inspired by those who had moved me deeply. When I was a child, I was blown away by “Wichita Lineman” by Jimmy Webb. People like him and the Beatles set me on my path. Without them I wouldn’t be here with you.”

I really loved your song, “Grief Built the Taj Mahal”. Were you as charmed as I was by the peaceful magic of this place – despite the crowds – and of the Mughal gardens?

“Oh, you lucky you are to have been there… No, I’ve never been… I wove this song around this story of love without really knowing a lot of details about it. Maybe my song is more romantic than the historical reality, but I like the idea, this romantic image…”

How do you write your songs?

It depends. I like to start with an idea for a title… But sometimes I have nothing. It’s more difficult. I sit down and find inspiration in what surrounds me. For example, today it’s raining, so I’ll start from that idea, that feeling. And then I’ll pull on another thread, a chord progression that I like… That’s what I love about music… The feelings and the possibilities are endless.”

And what instruments do you use to compose songs? Guitar? Keyboard?

“It depends. Before you came, I’d picked up my guitar. But lots of Prefab Sprout songs were written on a keyboard. Using both allows me, even when I’m working on the same track, to vary the textures and possibilities.”

On your new album, astonishingly, you played ALL the instruments. Why this choice? And how did you do it?

“There were a number of reasons for that. Firstly, as we don’t play live, we don’t earn much money, and we can’t spend a crazy amount of time in a studio. The other reason is that for ten years I’ve had enormous problems with tinnitus and I can’t play with loud amplification and a live drummer. I’m forced to work quietly. It’s sad, but that’s how it is, I don’t have any choice. I’ve become the conductor of an invisible orchestra. But my love of music, my desire to give the best of myself, has remained intact. And I applied myself particularly to ensure that the result sounded like a real group and not a dance record [laughs].”

I think you succeeded. But does that mean that the old magician won’t return to the stage?

“To be completely honest with you, I could tour, but only acoustically. Perhaps solo with my guitar…”

I remember the great acoustic demos released with the reissue of Steve McQueen. Who wouldn’t want to hear those live!?

“Thanks, it’s true I’ve made a little progress over the years!”

“Yes, that’s right, it’s always been like that. Our fans have always demanded we play more concerts. I like to be different. And my solitary character and my need to write didn’t facilitate life in a group either. Because the others wanted to tour more. And life on the road doesn’t help the process of writing which I love above all. But today, it’s a different problem, because my tinnitus doesn’t give me any choice about it. And I’ve still so much to write…”

Was that why Wendy Smith left the group in 2000?

“Maybe a little, but I think that above all she’d been right around the whole Prefab Sprout thing. She’d been in the band for 18 years. She had a demanding day job, and she felt like moving on, which is natural when you get to a certain age, as we had. It wasn’t something that happened one day, it was gradual.”

Wendy had another job? She wasn’t living off the royalties?

“Oh no [laughs], we hadn’t lived off them for a long time. You know how much record sales have collapsed. We no longer toured – and we would have been richer if we’d toured more, I admit . And we didn’t sell millions of each album. Just millions of all our albums together. That makes a big difference.”

In which countries was Prefab Sprout successful?

“We had some success in France, Spain, in Italy and Portugal. Germany has shown some interest in me for a few years too… We were never enormous in the US because we never played a single concert there.”

“Yes, yes, we recorded there but we never played. We recorded in Los Angeles, in Stevie Wonder’s studio – he played harmonica on one of the tracks.”

You also recorded with Pete Townshend from The Who…

“Yes, he’s a great guitarist. But I can’t really tell you about it, it was my brother Martin who was there. I was sick that day, I had flu! So I didn’t see Townshend’s takes [laughs]. But I know he likes our music. As for Stevie Wonder, he impressed me because he plays everything really well, piano, harmonica, drums. He was so good it was frightening.”

“I really like Jane Austen, Don DeLillo… And I read a lot of poetry: T. S. Eliot, I love French poets like Mallarmé, Nerval, Villon, Verlaine, Rimbaud and massively Baudelaire. I’m currently reading Roberto Calasso’s “La Folie Baudelaire”, a biography which is poetic in its own right. Did you know that Baudelaire had influenced Bob Dylan a lot?”

No, I didn’t know that. What records have you been listening to in the past hours and days?

How about French music?

“I love French Music. The last concert I went to – it wasn’t in Newcastle but in London – was Pierre Boulez, three years ago I think. And I really love the divine Debussy (he’s maybe the greatest of all), Ravel, Satie…”