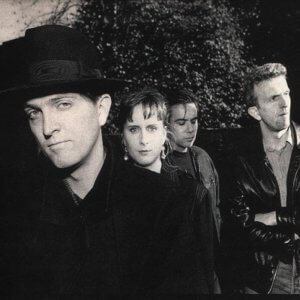 In Paris, as Prefab Sprout is launching into “Carnival 2000”, someone in the first row throws a handful of confetti. Paddy McAloon recoils sharply, and his hand on his chest, attempts to calm his runaway heart beat… “I have poor eyesight.. At first I thought it was some sort of liquid and then, as it hung in the air like smoke, I thought ‘God, I’ve been shot, they shot me down…’

“But it didn’t hurt and the music was still playing. I thought I must already be in Heaven.

“And in that case, the good news was that they listen to Prefab Sprout in Heaven! … But the bad news was… I’m on tour in the afterlife…!”

Paddy laughs, but all the same he still hates the obligations of touring. On the release of “From Langley Park to Memphis” he announced that he’d never do it again. But he’s on tour, partly to placate his record company, partly for the pleasure of those he never refers to in any terms other than “the fans”. Nevertheless, all this diverts him away from his obsessive passion: writing songs. Paddy may deny it, but he doesn’t seem to care more about life on the road than if he were a balloon restrained from flight by a rope anchored to the Earth.

TM: Although you’re usually very available, it was very difficult to get this interview. Is it the touring that’s wearing you down?

Paddy McAloon: I’ve given so many interviews… And sometimes I don’t feel like I have anything to say. I really feel there is nothing to gain by illuminating what I do. I know everyone says that, and I didn’t believe it myself when I was younger and I heard it from other songwriters. I was struck by someone like Van Morrison who didn’t want to talk about his songs, and I wondered why the journalists couldn’t get him to explain his reasons for not talking. I think it’s because when you answer these kinds of questions, you’re condemned to self loathing. You start to formulate an answer, and you start to despise yourself because these explanations all seem too prepared, too neat, too definitive. After all the interviews I feel I’m so utterly slick that I can’t stand it any more. Do you know what I mean? It’s really that I can’t stand myself any more.

TM: But I hope you can still understand that we are fascinated by creative work, even when it can’t ever be adequately explained?

P. McA: Oh yes, of course and I’m curious myself about people who don’t give interviews. I want to find out what they think of their work. But sometimes, you can spoil things by explaining. It can make you really grumpy, and there is no point in talking if you are unhappy. You just end up giving the impression that you’re completely lost. So you give an inaccurate image of yourself, and you leave people with the impression that you’re moody, that you have a dark side.

TM: Despite all of this, in all your recent interviews you’ve spoken about your lack of confidence, your singing, your guitar playing…

P. McA: Do I always say that? (laughs). That’s right. It’s not an attempt at false modesty. In my heart of hearts I love to write songs, and I don’t care much about the rest of it. But above all, I’m still a fan. After you hear a great voice, and even though you know you’ll never be Ray Charles, it’s difficult to settle for less. You always want the best, even when you’re not able to be the best yourself.

TM: Does this lack of confidence prevent you from trying new things? For example, working with a producer other than Thomas Dolby?

P. McA: Not at all, it’s to do with the ability to make myself understood. In a perfect world, I’d make the record myself just by snapping my fingers. But that doesn’t work because I’m too much in love with the mystery that the other people who work on my songs bring to them. My songs can’t surprise me because they come from within me. There are lots of things I don’t like about what Thomas Dolby suggests, and I tell him that, but there’s much more besides that I love. It makes me feel that it’s not just my work on a record, it’s something that’s a little bit new to me, just as it is for the fans. Sometimes I’d like to work with several producers, this was the idea for “From Langley Park to Memphis”. I liked Jon Kelly and Andy Richards (five songs, co-produced with Paddy, the two of them), but it takes a whole album to get to know each other. I naively believed that one or two songs with one or the other would be a good thing to do. I’d have liked ten producers but I realised that was stupid. And then Thomas Dolby is really, really, really good. There may be better people technically but they wouldn’t get the best out of Prefab Sprout. I love Quincy Jones, but I’m sure he couldn’t capture the mystery that fascinates me, at least not without damaging it. I don’t think he would cope with the problem of working with musicians who aren’t excellent technically.

TM: You’ve said that the ideal version of your songs was in your head and that the recorded versions always disappointed you. Have you ever thought of working with a more effective band, a more powerful singer?

P. McA: Yes, I still think about that sometimes, and then I remember the “Roger Daltrey syndrome” – he sang the words Pete Townshend wrote for the Who and he constantly felt uncomfortable because he knew it should have been him taking care of the lyrics. In a group, the voice must match what is being expressed, otherwise it doesn’t work. Or else you have to completely give the song over to someone else. I think about this, and I’d love it, but I can’t find the time to do it. I’m sure some of my songs could be hits for other singers. As for the idea of a more effective band, it’s not a question of being better musicians. The most important thing is the ability to describe the effect you would like to have and I am not always technically capable of that. Thomas Dolby often manages to get very close but I’m still a little disappointed. I’m probably being naïve, because obviously in your imagination, you’re able to get the best things in the world. In fact, if I worked on it a little more, I could specifically designate what I want, but I must admit it’s much more the atmospheres I have in mind than the arrangements that could create them.

TM: You seem so obsessed with writing and composing that this has become a escape from the real world. Do you ever feel that, perhaps you are wrong, that you’re missing something?

P. McA: Oh no, not at all. You work and you get some satisfaction out of this job. It’s simple, but you can count yourself happy if you can do that. Once you’ve tasted that kind of satisfaction, you try to get more, you isolate yourself from the world and you can end up with a very selfish approach. But even if I’m totally absorbed in my work, at the same time I’m in deep contact with the “normal” things in life. I never forget that in the great scheme of things, being in a group means nothing. I’m not rich, so I don’t live isolated in a community of rich people. I lead an extremely simple life. No one knows me, so no one recognizes me. I just work hard instead of wasting my time. Many groups gradually lose what it was that brought them into existence. At the start they wanted to create something exciting. They loved records and they wanted to compete with the ones they admired. And then you lose that motivation because your ego is so stimulated, you’re so happy to be the “new thing”, that other musicians have become your friends, that you’re part of a happy community… I don’t like that too much. I’m still desperately interested in the idea of creating something exciting, I think I’ve kept a fan perspective.