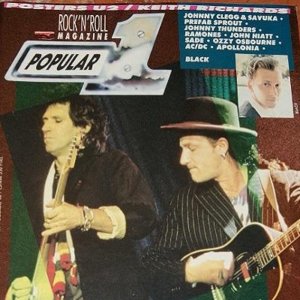 It often happens. I don’t know Paddy McAloon. I’d never talked to him before. But all the same, by the middle of our conversation I had the feeling that I’d known him for a long time. It felt comfortable, as if I was talking to an old friend. It may be because his two albums, “Steve McQueen” and “From Langley Park to Memphis” have been with me for a long time, reasonably familiar; and I’m sure we’d agree that a human being’s work bears the imprint of their character, personality. In short it’s a mirror of reality.

Paddy McAloon hasn’t had a haircut for 25 months. It’s true that from time to time he’s trimmed it for an easier to manage hairstyle, but he no longer maintains the rebellious image from the cover of “Steve McQueen”. What’s more, he has kept a curiously bohemian beard, something from the 1950s, probably an era in which he’d like to have lived. It’s funny, because it catches my attention, but whenever I see him he’s wearing a psychedelic waistcoat with a shirt underneath.

Paddy is the model of an English gentleman. He speaks softly, with simplicity and feeling, and a light irony which doesn’t grate.

“It’s a cliché,” he says, “but when I’m in Spain I like to enjoy the sun. It’s the sort of sunshine we don’t often get in England...” . We’re talking on the roof terrace of a Madrid hotel, not far from the Bernabéu Stadium. And it was sunny. That made him happy.

The truth is, Paddy, that I wanted to meet you. I’ve been a fan of Prefab Sprout for quite some time. But tell me one thing I’ve been curious about for a long time. Originally you said you were the best songwriter in the world, but a few months ago I read that no, you really weren’t, you were number two. But you didn’t say who was the best. And I’m still intrigued by that.

I can well imagine that

“Well, the number one, for me, is Johnny Green, He did the arrangements and musical direction for ‘West Side Story’ but he also wrote many wonderful songs. Unforgettable. He’s the best”.

So in fact you came to the conclusion a long time ago that the most important part of music is always the songwriting?

“There’s no other magic. Only the magic of good songs. That’s the hardest thing.”

It’s so difficult that there are only a few songwriters we can define as great, classic. Who do you like, apart from the Americans?

“I’ve always liked Paul McCartney a lot. I think he’s really underrated after he left the Beatles. I met him at a party the other day, and he told me some very important things. Such as the definition of rhythm, melody, lyrics. Above all I admire people able to write musicals. I’m not really some sort of 19th Century guy who likes old-fashioned composers as a pose. It’s funny, but I really like Prince. And he is probably totally the opposite of me. But even in the way he creates a rhythm, a drum pattern, he is definitive, unique. I noticed that in ‘Sign O’ the Times’. And when you create a rhythm you can limit yourself a lot lyrically. But Prince is fresh, original, great.”

From what I’ve heard, you’re not interested in the other elements of making a record. For example, the techniques of production.

“Above all, I’m a songwriter, that is my home territory. All the same I’m more interested in the concept of production, rather than in a drum pattern technique or creating a revolutionary form of sampling. When it came to light that Frankie Goes To Hollywood was nothing more than a Trevor Horn production exercise, many people were shocked. But what did they expect? That’s what I call a producer. It’s very possible incidentally that we’ll work together on the next album. I always dreamed of Quincy Jones, who would be great for Prefab Sprout’s music, but I’ve reached the conclusion that Quincy Jones can be really old-fashioned. But Trever Horn isn’t. He’s great. He’s modern, he magnifies the word ‘pop’. On the other hand he’s very undervalued by the new hippies who’ve sprung up, the acolytes, the Bruce Springsteen types or the incredible U2 who seem to have been sent by the Vatican as some kind of new religion.

I’ve let him talk and I’m feeling what I explained before, that it was like I’d already heard these things before, even though I’ve never heard Paddy McAloon speaking before. I don’t just agree with most of what he says, I’d sign my own name to it. So probably, for me, he’s one of the best songwriters.

And what happened to Thomas Dolby?

We need to talk more about this. Basically I think he’s done some very good things. Above all for Prefab Sprout. But what happened on this last album?

“Thomas had a dispute with the Dolby brand which had demanded he stop using the name, because it’s not his. He had a terrible time dealing with this issue, not least because they were also demanding an incredible amount of money. He wasn’t able to continue with ‘Langley’, and in reality the album was taking forever anyway. But above all, Thomas Dolby is a great musician.

“They weren’t premeditated things, they happened by chance. To cut a long story short, we needed a harmonica solo for ‘Nightingales’. We were asking ourselves who was the best specialist, and we concluded it was Stevie Wonder. Just by coincidence there was a party and our manager bumped into Steve Wonder’s manager. The truth is that Stevie had never heard of us. But we sent him some tapes from our album, and of course ‘Nightingales’. And he loved it. When he came to England he came into the studio. He didn’t just do a majestic solo, he also came up with other wonderful things, such as melodic lines for the same song. The truth is he’s a wonderful musician. Then in Pete Townshend’s case, the truth is we were recording in his studio. We needed a guitar part for ‘Hey Manhattan!’, and he laid it down. I wasn’t there when he recorded it, but I was grateful for his contribution.”

I’ve been told that you do not leave the house, that you live like a hermit, is that true?

“Yes, I go out very little. And to be honest I try to stay as far as possible away from London, from that madhouse of vanity, stupid adventures, and endless fashion parades. As far as possible from London. I live in a house not far from the sea and on the outskirts of Newcastle.”

You’re a countryman of Sting…

“Yes, but I never see him. I live with my mother and I devote most of my time to songwriting. Doing the songs for ‘Langley’ took me more than a year. I also wrote a kind of Christmas musical, which I’ve called ‘Total Snow’. Hopefully one day it’ll get out. But I don’t go out much. I nourish myself by writing songs, reading, listening to music.”

There’s a clear distinction in your songs between the ones you compose on guitar and others, the ones with more complicated chords, that you have to write using keyboards.

“Yes, that’s right. For example it’s easy to spot that ‘Cars and Girls’ was written on guitar, and, for example, ‘Hey Manhattan’ which I wrote on the piano.”

Incidentally, do you know if Bruce Springsteen had heard what you said in ‘Cars and Girls’? Did you have any problems with the record company? It’s the same label after all and you even put an image of a burning match on the single sleeve.

“No, there were no problems with the record company. I thought there might be, but they accepted it without any problems. And as for Bruce Springsteen, I don’t know anything, I don’t even know if he’s heard it. The truth is that it doesn’t worry me at all. The irony has probably gone over his head. Springsteen’s case is paradoxical. I don’t know if he realises what he’s saying, I guess not because it would be horrific for me to know how things are in Europe, with an overwhelmingly unemployed youth population, and to continue telling stories of Cadillacs and girls. Anyway, that’s an old story now, but once again it’s like coming up against the Vatican.”

Are you still fixed on the idea of not going on tour? Don’t you want people to see you playing live?

“It’s something that doesn’t interest me at all. I prefer to devote all that time to composing, to do something positive with my music. I’m terrified of the time I lose with travelling, in hotels, making mistakes in the live performance. I’m too much of a perfectionist to venture out and find something doesn’t go well live. There’s a lot of pressure to play concerts, but I’m not going to give in.”

‘What role does your brother play in the group?

“He’s like the voice of my conscience. I wouldn’t be able to do a lot of things if he wasn’t with me. He’s my brother, after all.”

Such a soft, delicate and pure artist, chemically pure.