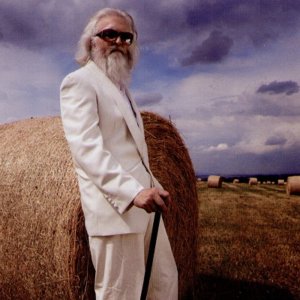 I still feel irresistibly drawn to the music that came out of the UK in the 1980s. And above all to Prefab Sprout, who along with Scritti Politti, created a new model for modern, intelligent pop music.

One of the most prominent songwriters of the era, Paddy McAloon unfortunately suffered eye and ear problems, and his activity has slowed since the turn of the millennium. But just at the point where it seemed he was about to become a lost legend, he has broken his silence. A completely new album, “Crimson/Red”, his first new material for 12 years, has finally been completed.

This return can only be good news. In overcoming the various constraints caused by his illnesses, this shining jewel – polished by Paddy himself in his home studio – is packed with songwriting craft. Enjoy this investigation from the hermit’s cave…

– Crimson/Red will be your first release in four years, but that’s a pretty fast pace by Prefab Sprout standards…?

– First of all I’d like you to tell me how you came to create this work.

“Well as far as I was concerned, I was always planning a new album, and intended to put it out shortly after the release of the previous work, “Let’s Change…”, which was quite an old piece of work. So I signed a contract to do that, thinking there would be plenty of time to work on the record. To cut a long story short: I missed the deadline. So last Autumn, about a year ago, I was hit by the harsh reality that I owed someone an album. So I immediately set myself to work to do the record, realising I had about 10 songs in a state suitable to be recorded right away, and from that point on I worked intensely on it. With this focused attitude and approach, I made the record in the Autumn of 2012 in about 8 to 10 weeks.”

– You previously released a solo work, “I Trawl the Megahertz”, but the new album uses the Prefab Sprout name, even though you are the only performer. What’s the state of the band right now?

“I don’t completely understand it myself (laughs), because the present condition of Prefab Sprout is certainly puzzling! But to be honest, I’d originally planned to call “I Trawl…” a Prefab Sprout album. Because as well as Prefab Sprout being a group name, it’s also a sort of label, which I use for all of my music. I’ve used it since before I formed a band, since I was young.

“But alongside that, it’s also a brand – well “brand” maybe isn’t the right word, but if something is called “Prefab Sprout”, people have a sense of what that means, so in that way it’s a brand.

“’I Trawl…’ is a work containing only one song with me singing, and there’s a woman’s narration all the way through the first track (laughs). For people who like listening to songs, I guess it could be very hard to accept. So I thought it would be reasonable to put it out as a solo work. On the other hand ‘Crimson/Red’ was contracted to be produced using the Prefab Sprout name. Because I have a hearing impairment, I can’t bear to hear loud drums and bass, and I can’t work with other musicians. That’s why I had to find a way to make a record by myself.

“So I let my younger brother (Martin McAloon) listen to the result. ‘What do you think?’ I asked, and his response was ‘release it as a Prefab Sprout record’, he was very supportive. My brother understands the kind of health problems I have had, and if I hadn’t had those then perhaps we would have made more records as a group, I’m sure we would. But I’m not acting as part of a group now, and the other members have no choice but to make a living on a path other than music. Yeah. That’s basically it. But I don’t know what will happen in the future. I still need to talk to Wendy (Smith) – she’s in a different place now and doing a job that is very meaningful to her. But she cheerfully supports what I do. Anyway, I decided to do it on my own, yeah, I made the record like that.”

– The single from the new album, “The Best Jewel Thief In the World” reminds me of “From Langley Park to Memphis”...

“Oh… To tell the truth, I was trying to resist reproducing that ‘prefabicity’”.

– Is that because it’s easier for you to revert to a former style?

“No, no it’s not… That’s an interesting perspective. I don’t think I’ve written all that many songs like ‘Cars and Girls’. It’s not that I don’t like that kind of sound, but that my interest as a writer has shifted elsewhere. So when I wrote that song I didn’t feel it was 80’s at all. Actually, in my head, it’s still an acoustic song – one of the reasons for choosing that song was that like other songs on the album like ‘Mysterious’ and ‘The Old Magician’, I’m a little obsessed with the idea of a narrative style song played on the guitar. But when I started making the record I felt that the song needed to reflect some of the excitement from the lyrics sonically, in the sound itself. So that’s why I started adding keyboards. But I noticed as I was going along that this song was quite different from others on the album, and all of a sudden I felt like I was “doing a Prefab Sprout”, that I was copying myself. Because that’s what seemed to be happening. But I wasn’t conscious of it at the time. My fingerprints are in the music, that’s how I think of it.”

– Talking of your musical identity, you’re 56 now, but surprisingly your voice is still as good as ever..

– It’s not flattery. When you listen to this album you can hear that your voice hasn’t changed from what it was in the past. I was saying to myself, “Oh, that’s Paddy McAloon singing!”…

“No, no…. Well I’d like to thank you for the compliment (laughs) because when I look at myself in the mirror, I’m completely white haired, I have an endless white beard, my hearing and eyesight are terrible, yet my voice… I don’t know why it is, I don’t think it’s as quite good as it was before, as you suggest, but yes, I’m still surprised it hasn’t gone. You’re not the only one to be surprised that ‘Paddy McAloon is singing’, I think that too! (bitter smile).