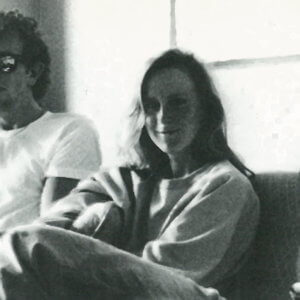 What differences do you find between the audiences in the UK and Japan?

[Martin] It’s pretty much the same, but the audience here listens very intently. They wait until the song has completely finished before applauding.

There’s a song called “Goodbye Lucille No. 1” on Steve McQueen. I love that song, it has a very unique title…

[Paddy] (laughs) I wrote that song in 1980. I know it sounds stupid, but I wrote 9 songs with the same title: “Goodbye Lucille No.1, No. 2…” etc. And that’s one of them. The girl Lucille isn’t in the lyrics, the content is the boys getting together and asking ‘why did Lucille go?’. He’s lonely. I made the conversation into a song.

[Paddy] I think so, yes. I think language itself is musical. That’s why I value words. Just hearing the words in the title inspires me a lot, and I wouldn’t want to lose that. I’m not interested in things like ‘Ooo baby” like other musicians do, or any kind of love song following that sort of formula. In that sense I’d rather do it like in “Steve McQueen”, where the meaning is camouflaged, I like that sort of effect. It’s a bit like a riddle.

So in a way it’s a bit like reading a novel?

[Paddy] I’m pleased you see it that way. If you put it into a story as I explained, it’s very easy to understand. You can see the whole picture. The story behind “Cruel” isn’t as clear, but “Goodbye Lucille No. 1” has a very clear picture, and “Hallelujah” is a continuous series of images.

Let’s change the topic. There’s a noticeable trend towards revival hits in the UK, for example “Spirit in the Sky” by Dr and the Medics, and “Eloise” by the Damned.

[Paddy] Yeah. I think that trend is sad and a bit disappointing. Whether it’s “Spirit” or “Eloise”, they’re very good songs, and when they were originally hits they had something special all their own, but it’s not the same when they’re remade. That being so, I think we should be writing new ones. It’s also true that good songs are getting rarer and rarer.

I heard you went to a Seminary Paddy. Oscar Wilde said the Bible was like reading a succession of poems, but did you draw any inspiration from it?

[Paddy] The New and Old Testaments are a bit different, but the stories that appear in the New Testament are all like poetry. But everyone has their own imagination and interpretation, there’s no single way of looking at it. That’s why I don’t think much about it. I don’t consciously take lyrics from the Bible, but I do have a religious background.

I don’t think there was a female vocalist in the band at the time you formed it,  why did you add one?

[Paddy] When the three of us started, we were doing jazzy stuff, a bit like Weather Report. But at that time we had no musical experience at all, and had only a very rudimentary sound. I was very ashamed of our level of musical skill, and I wanted to do something about it. So I thought it would be better to include a smoother and softer element, so I added a high, female voice. Wendy adds colour and purity to the sound.

Wendy has a beautiful and pure voice, but it’s always secondary. I saw that in the live performance. Does she not ever want to take the lead vocal herself?

[Wendy] Our band wants to sound the same live as on the record.

[Paddy] It’s difficult for a female vocalist to take the lead, though it depends on the song. In our case, the songs are made up of fairly masculine thoughts, and if you do it with a female vocal it’s not going to work. I want her vocals in this band to add a touch of spice.

Paddy had done almost all of the talking. His manner was very gentle, and quite different from his live performance.