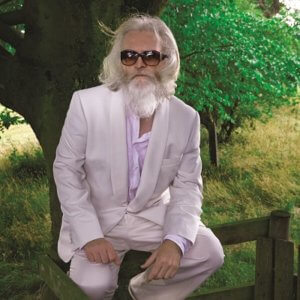 The Return of Prefab Sprout

A new Prefab Sprout record with newly recorded and relatively recently written material was something almost no-one was expecting.  But with Crimson / Red, that’s exactly what Paddy McAloon delivers, and of course it’s fantastic.

No less surprising is that the reclusive English musical genius decided to make himself available to the media in connection with the album release. And there isn’t a trace of the inaccessibility you might expect from his reputation as he talks on the phone from his home in Durham. Quite the contrary, he is kindness personified as he notes what a pleasure it is for him to be interviewed by a namesake before attempting to explain what it was that changed so he finally felt comfortable releasing a newly recorded Prefab Sprout record, 13 years after the last.

– I suffered from health problems in 2006, and it’s only now I feel comfortable with loud noises again. Not that I could cope with a band with drums and bass in a rehearsal room, but on my own and with a computer I’ve been able to make pop music again.

But that’s not the only reason we’re finally being presented with a new Prefab Sprout album.

– I’d signed a deal, and I had to fulfill that. I was afraid there would be legal problems if I didn’t complete the contract, and towards the end it was becoming urgent I finished it and had it released before the end of 2014. I’d been working on another project and I had to put that to one side because of all this.

Given his focus was really elsewhere, the pragmatism used by Paddy McAloon to make Crimson/Red may not be surprising.

– I selected ten songs I thought were good from those I’ve been working with over the last 18 months. I chose pop songs that would fit well in this sort of context, and left other things aside.

It’s good to hear your health is better.

– Thanks! The tinnitus was the worst thing I’ve been hit by, it was scary. From 2006 I’ve had a constant noise in my head, and that meant I couldn’t listen to music. And even though it’s gone now, I’m not cured, it comes back when I’m tired.

– I have detached retinas, but now I can see at least. I’m going to need a secondary laser treatment in the autumn, but that’s part of my ongoing treatment.

And although his health problems have contributed to Paddy McAloon and Prefab Sprout not being so publically active, he has never stopped making music.

– Even when it was at its worst, I kept writing. It was very down-beat, I wasn’t driven to make optimistic music. Even today I’m still affected by what hit me. I find old cassettes I recorded and I’m struck by the fact that they were made during a happier and carefree time. I do now classify events – and music – under the headings BC and AD. Before the catastrophe, and after the disaster…

But optimism is returning.

– There are things on Crimson / Red that are – shall we say – pointing forwards. Adolescence, for example. But that might be because there are songs written both BC and AD on the record, between the years 1996 and 2010. There are songs that can pull you out of your introspection, if you don’t look up.

– Well, that kind of creeps up if you’re not paying attention. What are you thinking about?

The Old Magician, for example.

– I was 40 when I wrote it, in 1997, and I’d started thinking about my own mortality. I think the lyric has the same weight today, what I wanted to express then still applies. I have a video where I sing it in 2003 – a home recording made simply to document it, and it’s interesting to watch it. Back then, ten years ago, I thought of myself as middle-aged, but when I look at it today I see a relatively young man, hair still brown, and without illnesses.

And in ten years, you’ll look back at your current state and make the same reflections.

The Songs Of Danny Galway is also about Paddy McAloon, and is the story of a meeting with Jimmy Webb.

– That was the starting point of the lyric, at least. I met him in a bar in Dublin, it might have been 1991, when I was there to play his song, The Highwayman, on a tribute show. Oh, you know it? It’s so beautiful. Wichita Lineman touched me very early on, even as an 11-year-old, long before I had even started to mess about on a guitar. You might consider my song as the fan-letter as I would have written as an eleven-year-old if I’d had enough understanding.

You call Jimmy Webb “the sorcerer from Wichita, a wizard”, and you call yourself “The Old Magician”…

– Haha, don’t go there. I’m not into that kind of thing. But if you want me to be completely honest, there might be some kind of magic in music. For a song to strike the artist first, and then the listener, some kind of magic is required. I actually wrote a concept album about that, but it hasn’t been released.

It’s not the only unreleased record Paddy McAloon has in stock. His last album, Let’s Change The World With Music. was a collection of 17 year old recordings, and no less than nine other unreleased titles are listed in his recent PR biography. When will we get to hear them?

– You know, for me it’s not about that. My drive to write new music is much greater than my drive to record it. In the time it takes for me to record a new album, I can write three brand new ones, and I get much more pleasure out of doing that. But that has its flipside, of course. People stop me in the street and ask for details about the new music I’ve made, about things I’ve accidentally let slip in an interview like this, and that, in all honesty I’ve forgotten over time. I was in a shop and a stern-looking man who seemed even older than me came up and rebuked me “Son, you have to release this-or-that record.” But for me this isn’t about releasing records, it’s about creating new ones, discovery, getting better and better.

Your need to create new music is more important to you than my need to hear it?

– Exactly. Precisely that. And when I’ve created something, I put the music aside and forget it. I don’t think I could remember Jordan: The Comeback, for example, even if I tried.

The fact that both Crimson/Red and the previous album, Let’s Change The World With Music consist of old material is not really all that strange. Even on your debut Swoon in 1984, parts of the material had been written several years before.

– Hmmmm. If I think about it, I think my solo album I Trawl The Megahertz ten years ago is actually the only record that was recorded in its entirety at the time I wrote it.

– Well I was so close to completing it – I can’t tell you what it was about – so now it’s lying there and begging to be finished. But it’s like a book you put away with only one chapter left just because something else pops up – it’s hard to find your way back.

Instead, Paddy McAloon is working with new material now.

– Oh yes, after Crimson/Red, I’ve had time to write a lot. I’m arranging it now.

There are several reasons why Crimson/ Red is being released under the name Prefab Sprout, even though it was Paddy McAloon himself who created every element on the record.

– Prefab Sprout was actually the label I chose to put on my music even before the band was formed. Even so it was difficult to put it on the record, but I’d been contracted to make a new Prefab Sprout album. So I asked my brother Martin if it was okay for me to do it myself, and he knows what difficulties I have had with my illnesses, so he thought it was good that I got myself moving a little. And these are ten good pop songs, a bit like you’d expect from a Prefab Sprout album.

But when he released Prefab Sprout’s debut album Swoon almost 30 years ago, Paddy McAloon was thinking differently. Then he made it as complex as possible, because he didn’t think he would get any more chances to make a record.

– Yes. I wouldn’t call Swoon an obscure record, but the lyrics aren’t linear. That might contribute to the feeling of complexity. You know, when I listen to everything that’s weird about it now, I get a strong desire to return to it.

You want to record a new version of Swoon?

– Why not? I feel strongly drawn to it, sort of like a hobby. If I can ever figure out what and how we play on it…