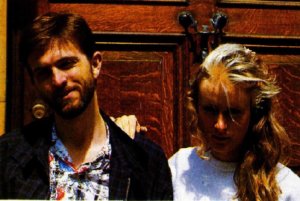 Note: this is a composite of two articles from the Yugoslavian “Rock” Magazine of August 1985, and the Swedish “Schlager” of September 1985. These were similar but with slightly different content, so have been combined into one.

Does the world need another band discovered by Elvis Costello? Sure, if they survive the story, and live to tell it themselves. They’re called Prefab Sprout. Intellectual, smart, multi-layered, pretentious. But still fun. Sometimes even complicated equations work. Which may lead them to pop’s own Nobel Prize..

Prefab Sprout’s second album was rated “by the standards of most contemporary pop, exemplary.” by the New Musical Express; “An incredible achievement… I can’t imagine a finer pop record being released this year, or for that matter this decade. Yes, it’s that special.” Melody Maker confirmed; “Without a doubt, the best album you’ll hear this year,” echoed the Record Mirror.

All three quotes refer to the album “Steve McQueen”, by the still little known band Prefab Sprout. This is their second attempt at earning international acclaim; their debut album “Swoon”, a production of only slightly lesser quality, having passed by largely unnoticed worldwide.

The band comprises Paddy McAloon, composer, singer and guitarist, with his brother Martin on bass, Wendy Smith, general duties (including being Paddy’s girlfriend), and drummer Neil Conti. The McAloon brothers formed a band when they were boys, or at least that’s when they dreamed and planned it, having chosen their name in 1971 when Paddy misheard a verse in a song by the duo of Nancy Sinatra and Lee Hazelwood. Wendy joined about three years ago, and Neil was added around six months back.

“Steve McQueen” was amongst the best-selling 20 albums in the UK for the first week of its release. It was named after the late film actor, not because of who he really was, but because of what he usually embodied on the big screen – an adventurous, strong and independent individual. And such is the music of Prefab Sprout, full and rich, distinctive, with a touch of sentimentality; a voice communicating something that many fail to reach.

“I hate my voice,” says Paddy. “It never does what I want it to do. My voice is pure, but I have trouble maintaining the tone, that’s when Wendy helps with the harmonies. No, it’s not false modesty”. Paddy is talking to me in his Geordie accent; like most people from Newcastle – birthplace also of Sting, Eric Burdon, Bryan Ferry, and where Mark Knopfler grew up – he’s friendly and talkative.

Paddy is a musical intellectual, a rocking literati! A cousin of David Byrne without the funky leanings…

Following the album “Swoon”, the band were lumped in with the neo-acoustic movement, even though they used synthesisers. For “Steve McQueen” they hired Thomas Dolby, the eccentric scientist, to produce them and to add many more electronic flourishes, but they’re by no means a synth band.

Paddy: Our music was indirect, complicated, wordy.. I see that as the big mistake we made on the previous record, also that we were difficult to understand, but at that time we didn’t know how to achieve what we wanted. We didn’t communicate. We’re much more concise now.

Did Thomas Dolby point out to you what you were lacking, what had prevented you from attracting massive attention previously?

– I don’t know. I just know that we make better music than most people. I’m not even trying to think about where our music fits in, because I know you have to listen to our records more than once to appreciate them. Our songs are not instant…

‘Steve McQueen’ is a record full of melody, sentiment, melancholy. How can anyone not like it?

– It may be that today’s youth don’t have the patience needed to listen properly. They seek immediate experiences. We don’t provide them. This is timeless music that goes beyond the demands of fashion, the events of the moment. When all today’s hits are forgotten, people will remember this year as being when ‘Steve McQueen’ was released and they’ll say ‘that was a great album!’ The difference between our previous LP and the new one is that the first was intellectual, contained lots of words, the second record combines music and text into a tight whole. Now it’s all of a piece, that creates a certain impact… Melancholy. Yes, you will find it in our songs, but I hope it’s not too sentimental or sad, because the music is also full of happiness. I like that kind of music, it’s a mixture of both. The most beautiful things are both happy and sad at the same time.

Do you think you got what you wanted on this album?

– Certainly we did, maybe even more. We never wanted to record records that will be forgotten next week. Today’s pop music is so forgettable and many people are recording records to fit a formula; They don’t believe they can make music with genuine emotion. It would never occur to me to record albums that don’t have a spirit of individuality… That would be a mistake; you should always put everything you have into everything you do because people always go back to the ‘classic’ records of the past. That’s the kind of music we want to create.

Success – if not commercial then artistic – is the greatest reward an artist can receive. There’s a feeling that artistic success is more rewarding because it’s more honest – there’s some insincerity in the worship of pop performers; successful bands and performers have to wonder – if they haven’t been blinded by their PR – whether it’s because of the pretty trimmings, the wardrobe, the marketing…

Most of today’s bands wouldn’t pass a quality test. Prefab Sprout are honest, there’s no image here, no exploitation of the visual. Everything is subordinate to the music, as it should be, this is the music industry. Unfortunately the industry is increasingly embracing other aspects of the entertainment business, and prostituting the music. This album relies more on the rhythm of the vocals and the language; to be more precise, it’s based equally on the music and the lyrics.

That contradicts what you said earlier; it implies the lyrics are still more important than the music.

– It’s true, that’s something I can’t shake off, but I’m not trying to pass myself off as a poet. The purpose of my lyrics is that they’re used with music. I tried to write a song that would be slight, throwaway, only good for a week’s worth of use, and I seem to have succeeded. I called it “The King Of Rock’n’Roll” and it’s not about Bruce Springsteen (smiles). It’s about people’s longing to become successful, famous… I’ll play it during the upcoming tour and see what reaction I get from the audience.

Touring is an option you categorically rejected. How did you come to compromise?

– We feel we have to, we want to sell records and as we have no success with singles, the only real way to present our music to a wider audience is through concerts. We were told by the record company that they thought we needed to bring our music closer to the masses. Honestly, I’d rather be in the studio. composing at home. I hate live performances.

You’re often compared to Elvis Costello and Roddy ‘Aztec Camera’ Frame. Do you think of yourself as part of a dying breed of “musician-intellectual”?

– No, not really. We’re only seen as intellectuals in the pop world, in other areas we’re nothing of the sort. The different groups are quite different in terms of the pop world and art, for example.

Did you have any problems using Steve’s name for the album title?

– The record company lawyers told us we shouldn’t worry, there wouldn’t be a problem, but you never know. I hope there won’t be, even though we haven’t been able to get written permission from his widow. We didn’t use the name to cash in on its popularity, and how could we possibly do that when the guy has died?

At the time Prefab Sprout signed their contract with CBS Records, there was an ugly rumour that the famous company, having got the Rolling Stones to sign, also wanted someone who could make good music. That’s why they chose Prefab Sprouts, who received an eight LP record contract. The second record is now here. And what a choice they made!

In addition to the two singles released from the LP in England, ‘When Love Breaks Down’ and ‘Faron Young’, which failed to penetrate the ears of the record buying public, Prefab Sprout’s place in the LP charts is steadily on an upward trend. And since LP buyers aren’t known for their volatility, we can expect Prefab Sprout to stay in the charts for a long time. Which is exactly as it should be.

Looking at the competition, Paddy and his gang have nothing to fear. If there was ever a record that could be declared a pop masterpiece, it’s Steve McQueen.