This has been listed as being in the “Riley Smith Hall”, but Dave Wilkinson who was working as a steward recalls it was in the larger refectory and watched the soundcheck.

“They’re getting everywhere, I swear. Those posters are plastered on every shop window from John O’Groats to Land’s End (a bit of a bore for Ian Botham, I should think). That single is all over the television – even on Wogan – and now Prefab Sprout crop up where even angels fear to tread and threaten to blight what should have been a quiet weekend away. Still, at least they know their place.

“Polite and unobtrusive, this Prefabricated Sprout is just the sort of plastic vegetable ‘intelligent’ pop to which a certain breed of foolish young student will always cleave.

“Just pale and interesting and radical enough to allow them to express their wild alternative personalities without ever threatening to disturb their revision.

“My consort for the evening is no great music lover but still she puts her finger right on the spot. And after that with no expert knowledge or prompting whatsoever, she defines this Prefab Sprout as a cross between third-rate Steely Dan and second-rate Aztec Camera. Which is precisely what they are.

“Gentle hummable rhythms and melodies that put insight and sensitivity high above mere motorcars and girls will always have a place in my heart. But space is limited and, although it is a splendid silly name, Prefab Sprout will have to do a lot better than this if they want to get in.”Roger Holland, Sounds November 16th, 1985

“They came back to Leeds and played at the University later the same year. They played a lot of songs Paddy introduced as from their imminent new album, but in fact Protest Songs never got released until 1989. Can’t find a set list for that gig, but looking at the track list of Protest Songs, my memory is of them playing nearly the whole thing (Not Life Of Surprises, which wouldn’t have been on the originally scheduled release anyway, or The World Awakes or Diana – nearly everything else though). However, other set lists from the tour show only Horsechimes, Tiffany’s, and Wicked Things. But I will go to my grave insisting that at the very least, in addition to those, in Leeds they definitely played Dublin. Great gig as I remember, despite the terrible venue that was Leeds University Refectory.” Graham Corless via Facebook 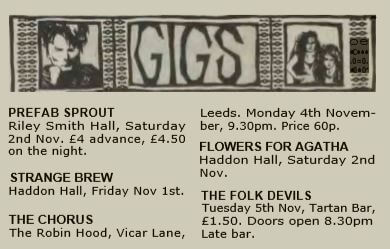