01. Moving the River02. Cars and Girls03. Green Isaac04. Bonny05. The “I don’t know the Italian for ‘My guitar’s buggered'” blues/Faron Young*06. Hallelujah*07. Lions in My Own Garden (Exit Someone)08. Appetite09. Dublin10. Wicked Things11. Goodbye Lucille #112. Don’t Sing13. Tiffany’s14. When Love Breaks Down15. When the Angels16. Cruel17. He’ll Have to Go18. Horsin’ Around19. Appetite*20. Ghost Town Blues*21. Couldn’t Bear to be Special*22. Faron Young*Not present in Source 2. Second version of Appetite is chopped off in Source 2.Recordings of this concert exist. Source 1 fromDime Master cassette > Nakamichi > amplifiers > tascam audio cdrw750 > cd > computer > plex tool professional XL > wav > flac, Source 2 unknown lineage and incomplete, was on a cassette borrowed from a collector and trader. Both reasonable quality and very similar audience recordings, rather toppy particularly during the opening track which seems to have had some odd sound problems present on both – sounds almost like fireworks crackling- but they settle down and become quite listenable. They’re distinguishable mostly by different crowd noise.

“In the first half of the 1980s, we’ve seen two distinct types of emergent rock bands: the first kind being those who have immediately entered the charts with their first record, and the other the so called “cult” bands who gradually become more respected and popular as they work patiently and meticulously on the quality of their output. Prefab Sprout are in this second market segment. English, from Newcastle, they opened their tour in Milan, and will be coming to Bari today, Naples tomorrow, Saturday in Rome, Padova on Monday, Bologna on Tuesday, Florence on Wednesday and Turin on Thursday the 27th.

“Leader and mastermind of the band, the 25 year old Paddy McAloon delightfully embellishes his soundscapes and songs, a sharp observer of the reality of life in the English provinces, and a delicious photographer of the state of the soul and of touching love stories, sometimes bitter, sometimes sweet. In Prefab Sprout’s repertoire, heard almost in its entirety during the nearly two hours of the show at the Rolling Stone, mundane subjects are seen through a soft focus filter, astutely rounded off by Paddy’s voice, maybe not entirely suited to rock music, but perfect in this gentle and evocative context.

“The first impression of the concert was far from satisfying because of the poor quality of a temperamental sound system and the uncertain and immature voice of the main protagonist.
Then some features of Prefab Sprout broke surface and in the progression through the more or less well known compositions of the albums, Swoon and Steve McQueen and into the semi-clandestine Protest Songs – a compilation released in only in very limited numbers so far because of the opposition of the press and scepticism of the record company regarding the politically controversial contents – some lovely pure music emerged, simple and free from artificial effect.

“Straightforward and struggling to sustain a concept of integrity and faith in music in its purest state, Prefab Sprout and Paddy (who spent his youth in a seminary), paint in their songs a world which maybe belongs more to literature than the dynamic of rock music. Prefab Sprout are careful to avoid the disturbance of spectacle; they don’t allow themselves any frivolity between numbers, and even the look is austere.” 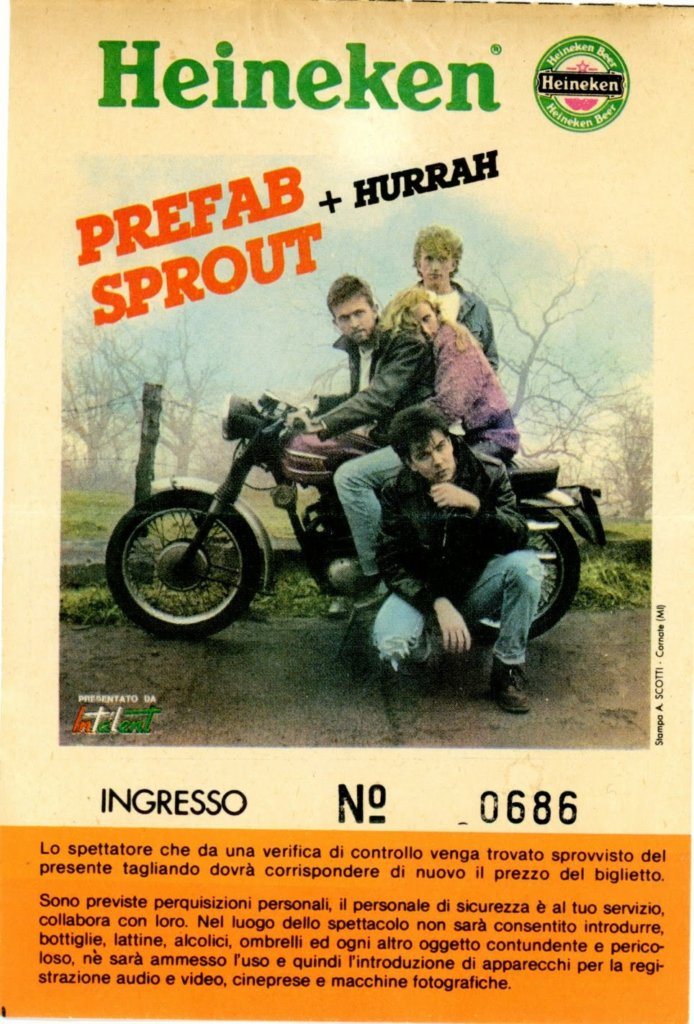