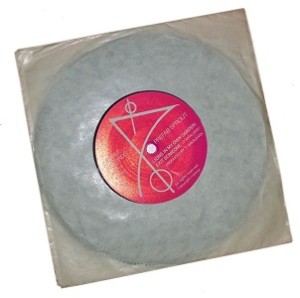 I guess it’s going to be a surprise that the Candle “Lions” isn’t number one.

After all, it is by some distance the most iconic Sprout collectable. There is something about the angular, red, Candle logo and cheap paper sleeve that really fires the blood when it pops up on Ebay or Discogs.

But the reason I haven’t included it at number one is that it actually isn’t all that difficult to find. Expensive, yes, and you’ll have to hunt a bit for a reasonably priced copy, but it isn’t an impossible task at all. At time of writing there are two on sale at Discogs, but as a warning, the Japanese one would also have VAT applied on import which will add a large and unwelcome chunk. They’re also at the top end of what I think is acceptable pricewise, though not out of court. Copies appear every few months and if you keep your eyes open you may get a relative bargain.

The story of the single is that it was paid for by Martin working nights on a building site or quarry, and was produced in an edition of around 500. Paddy, famously, was disappointed that the vinyl sounded just like the tapes, he was expecting some sort of vinyl magic to transform it into something like a T Rex single. But anyway it was sold at gigs and in local shops, and given to industry types, with Martin doing the legwork. Without Martin’s determination, Prefab Sprout wouldn’t have made it, this is often forgotten.

And here’s one of the very copies he distributed, complete with address and contact details. 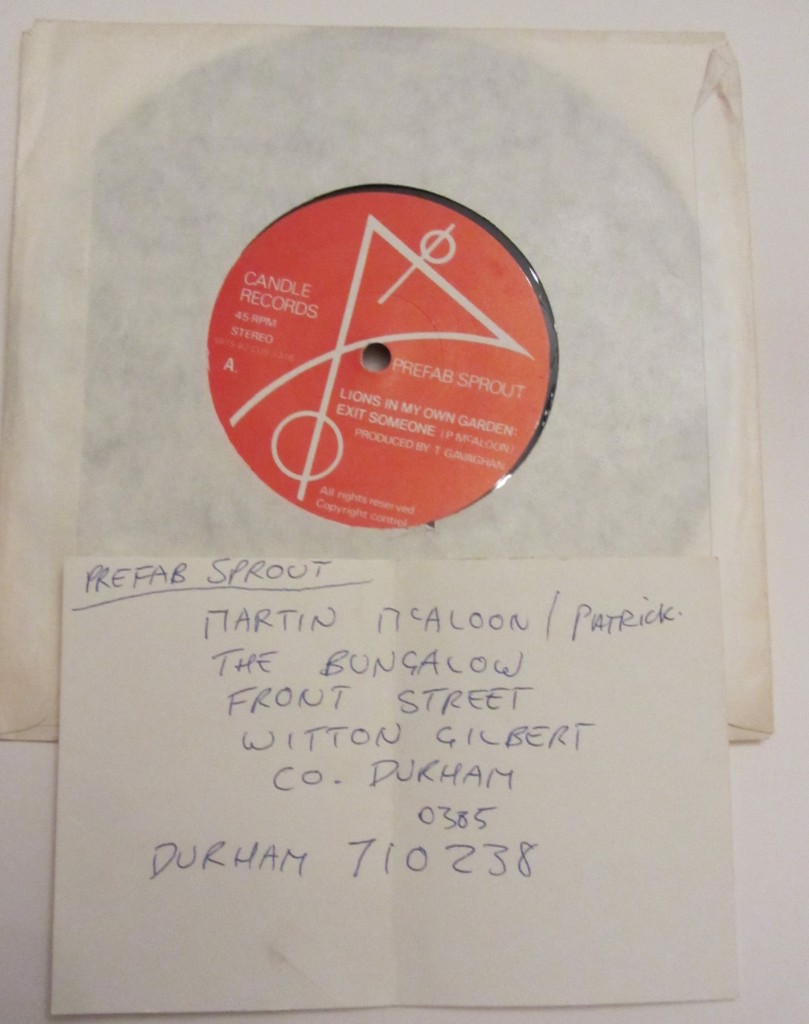 That note has “M. Winwood” on the other side. I contacted Muff and he remembers nothing of it. But via whatever route the single came to the attention of Kid Jensen and John Peel, and to Keith Armstrong of course, and the rest is of course why we are all here.

Unless you hit REALLY lucky, you’re going to pay something in the region of £80-100 for this, and the prices (which I track here) are trending upwards as interest in Prefab Sprout increases. Striking lucky does happen, but as a tip, avoid bidding on Ebay as when people get into a bidding war the prices can really shoot up alarmingly. “Buy it Now” is fine, Discogs is OK – though the dealers are pretty price savvy now – or check other online outlets, CDandLP or MusicStack for example.

You definitely won’t be competing with me, except for really interesting copies like the signed one that was on Ebay last year. I have a few copies from the period when no-one much was interested.

You’ll hear a lot of stories about people who have picked their copy up for 50p at a record stall in a market, or had one from the band direct, and so on. That doesn’t really happen any more, especially the band part as Martin apparently had his numerous excess copies stolen from a shed, but the thought you might find something adds a frisson to flicking through boxes of singles in obscure shops.

If you just want the vinyl, worth knowing that the 1983 pressings from Rough Trade and Kitchenware were done using the same stampers – I guess hastily retrieved from the original manufacturer by Martin! – with the Candle information scratched out and a Kitchenware label replacing the Candle one. They are essentially identical otherwise and can be had very inexpensively. There is also a later mastering and pressing from 1985 which was done when the single was sold as a double pack with “When Love Breaks Down”. Information is in the discography. 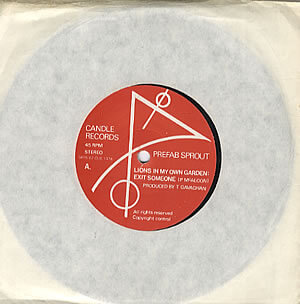 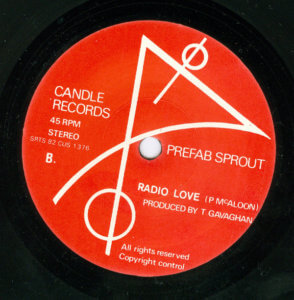