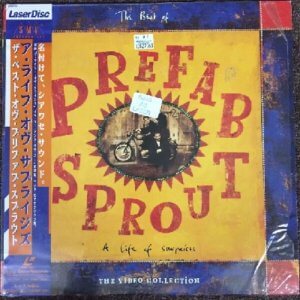 So, after a one week hiatus because I was travelling back last weekend from the Far East, here are the scores on the doors so far:

Now I have a feeling this one is going to be a hard sell, but bear with me.

Who wants to spend two hundred quid on 12 inches of obsolete silver plastic when the content is available free of charge at something approaching five times the quality on Vevo or YouTube (albeit with a bit of messing around with VPNs to get the full set)?

And for which the players are unreliable, fragile and extremely bulky, and which you may have to get your soldering iron out to modify so as to generate a usable output?

Don’t all rush at once.

Let me try to explain why I think it’s worth it, and why I’ve listed an object which on any rational criteria is completely useless, high in the list of top collectibles.

The essence of collecting is always the search. And this laserdisc is pretty rare. I don’t know the full story, but what I’ve heard is that only a handful were produced before the idea was dropped by Sony Japan. But it’s not impossibly difficult to find, in fact there’s one on sale at the moment. In Peru of all places. So it’s a good challenge. It’s rare and unusual, and that’s catnip to the collector.

Rarity has two additional consequences: (1) You build up for a full scale dopamine hit when you eventually find it; and (2) There isn’t a lot of price history around, so you might just be able to grab a bargain. It’s the kind of thing you might find at a car boot sale, or on a cheap buy-it-now on Ebay, or on Yahoo Auctions Japan. 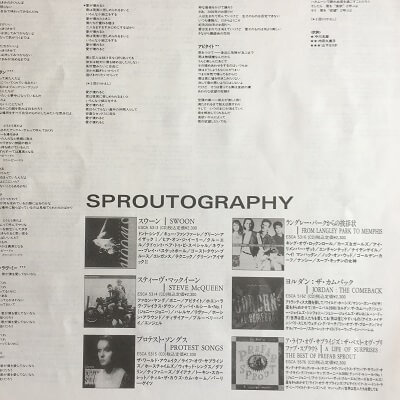 As with all Japanese productions, it’s a lovely object too: a very nice LP size and plenty of inserts and bilingual notes, with a retrospective piece by Toru Watanabe, the big Sprout expert in Japan (think Pete Paphides East). And an Obi of course. The other Sprout laserdisc – “From Langley Park to Hollywood” doesn’t have one of these. Inside, the silver disc is large and satisfyingly shiny. One of the things I like about this format is that it’s the same size as Vinyl LPs, you’re not straining your eyes to read things.

It took me absolutely ages to find a copy, and I really paid through the nose when I did – it was on a US Ebay listing which was locked for the US, and I had to track the seller down and persuade him to sell it to me by indemnifying him against loss in transit. Western Union payment as I recall, and he sent it.

About 5 weeks later, I was regretting granting the indemnity, as it had yet to arrive and the tracking had stopped on arrival into the UK. A few weeks later though, just as I was preparing to chalk this up to experience, I got a card through the door telling me I had to pay some exorbitant amount to HMRC for import charges. Which I’d completely forgotten about. And this is an important lesson to remember when you’re importing bigger ticket collectibles: expensive stuff gets looked at and taxed. 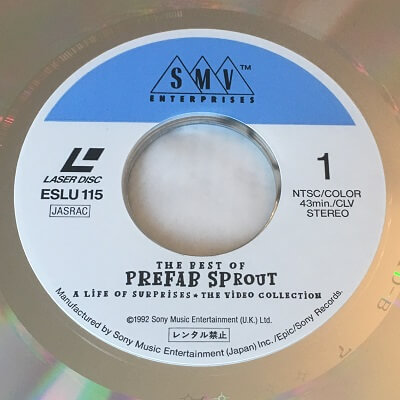 So at last there I was with my laserdisc. Now let’s face facts: the sensible thing to do at this point would have been to take it out of the packaging, admire it, clean off the thumbprints, and put it safely onto the shelf.

But unfortunately for me I’m not that sort of person. I absolutely knew I had to play it. And so the next few days were spent looking for a player in reasonable nick. For reasons which would shortly become all too obvious, the players on Ebay tended to be “Collection Only”, “sold as seen”, and in odd corners of the Shetland Islands or more remote parts. However I lucked out: a Pioneer unit was put up on a £50 buy it now with collection from a few miles from my house. It turned out that the seller was clearing his deceased father’s house, and his father having been a bit of an early adopter of tech had a really top of the range laserdisc player which had been kept immaculately maintained and not used much anyway.

The first thing that became apparent was how big and heavy it was. When you’re used to compact modern A/V equipment, the sheer size of a laserdisc player is a bit of a surprise, they’re massive and they don’t really fit anywhere in standard cabinets. It was quite an effort to get it to the car and then into a place of safety in the house (before I had to explain to anyone what it was and why on Earth I had felt it necessary to get one). But on powering up, it made numerous very satisfying clunks and whirrs, and a very bright vacuum fluorescent display flickered into life. I pressed the “eject” button, and the tray slid out with a smooth and pleasing kerplunk. Everything seemed to work perfectly, except that this was a PAL unit and the laserdisc is NTSC, and it was necessary to make an internal mod (track cut and bypass switch)  to get the signal out to the SCART. Easy enough to do, so I did that and connected up to the TV with a SCART adaptor. It worked like a charm. Pioneer kit is great (Sony players are notoriously unreliable incidentally). And the player also works with CDs, which is funny as feck, you have this tiny 5″ disc in the middle of a massive machine, sort of quivering like a lost soul as the tray slides in, inexorably. But I digress.

Now obviously I could just have turned YouTube on and watched the videos without any of this messing about. But there is something about using this old technology that’s a bit more enjoyable. It’s the mechanical aspect I think, the whirrs and clicks, and the machine even smelled great, like old furniture polish which I suppose it had absorbed in its former home over thirty odd years. You also feel a bit more connected with the time the material came from in a way.

Since then, I’ve obtained more precisely two more different laserdiscs – “From Langley Park to Hollywood”, and the Kitchenware sampler collection “One Way Ticket To Palookaville” (which is great). Plus a couple of other copies of “A Life of Surprises” which were too cheap not to hoover up, and one was factory sealed. And the Pioneer player is permanently wired into the analogue A/V setup, just in case I fancy using it. Which of course I tend not to, but it’s comforting to know that I can. I have this feeling that my Sprout collecting is at least in part to cover for my antique tech fetish.

Be that as it may, of course you don’t have to go to the bother of playing the things. You can pay anything between £50 and £300 for them (import tax included), and they’re lovely things to own. 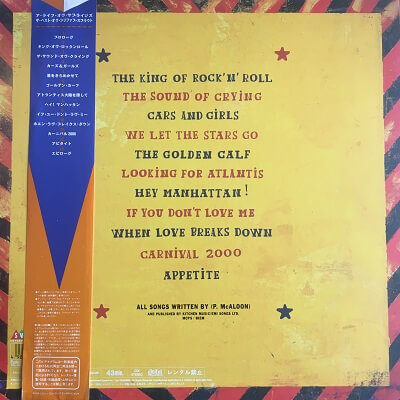