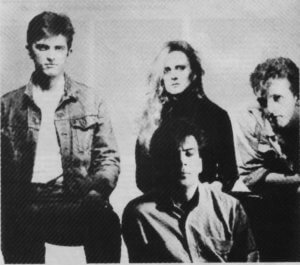 GASP! SINGER WITH PREFAB SPROUT HAS WHAM! ON BEDROOM WALL

“I put it up for a laugh!” adds Wendy Smith quickly. She’s in a bit of a state because Prefab Sprout finally have a chart hit with When Love Breaks Down and are about to go on Top Of The Pops. Cheering on the sidelines: Wendy Varley.

Say what you like about Top of the Pops, if you were asked to appear on it you’d go a bit peculiar. Wendy Smith of Prefab Sprout doesn’t even like any of the other pop music around at the moment, but that doesn’t stop her being excited at the prospect of her first TOTP “experience”.

“Paddy (McAloon) rang me at quarter to nine this morning to tell me we’re on. I haven’t even done my washing yet!” she laughs. “It’s funny, when something like this happens you think you’ll go out and buy something nice to wear, but when it does happen you just don’t have the time for that. I’ll probably wear a black polo neck top and ski pants.

“I phoned my mum this morning to tell her I was on and she said, ‘Oh really? That’s nice.’ The thing is, they think we’re going places anyway, so they expect it. They see it as a natural progression.”

Like the rest of the band, Wendy, 22, comes from the North East. Until now their singles haven’t quite made the charts, though they’ve had their share of praise. But the latest single, When Love Breaks Down, has changed all that.

Wendy and Paddy, who writes all the band’s material, are going out together, “But we don’t talk about that,” she says firmly. She initially met the other band members through friends. “I mentioned that I could sing for some reason — I’d done things at school — and that was it, I was in the band and on the demo and everything.”

The bizarre name, Prefab Sprout, was Paddy’s idea. “This is so boring. Paddy just made it up when he was a kid, because that was the kind of thing groups were called — T Rex, things like that. He just remembered it from then.”

Newcastle has remained the band’s base and, according to Wendy, there’s been no temptation to change that. It’s where family and friends are, simple as that. “Newcastle’s a bit limited for shops though,” she adds, so I buy a lot of my things in London. I think the best shop up here is probably Marks & Spencer They’ve got the best jumpers and everything. And Warehouse and Next.”

Wendy s keen on old clothes too and in fact is a hoarder of “anything that’s nice, even things like nice sweet packets. I’m not a tidy person at all. I keep trying to tidy up, but it never gets any better. I just seem to shift things around from one place to another.”

The focus for her untidiness is her studio flat in Newcastle’s city centre. “On the walls? I’ve got a poster of Wham! actually! I put it up for a laugh. It was in Smash Hits. Apart from that, my step mum and step dad are both artists so I’ve got pictures on the walls that they’ve given me.”

Wendy’s involvement in music wasn’t a life-long ambition fulfilled. “I always thought I wouldn’t do a normal job, but I didn’t know what I’d do. When I was a really little girl I wanted to be a ballerina — the usual thing. I started going to ballet classes when I was four.” In fact, the interest in dance remained strong; she was considering going on to do a dance course at a polytechnic after her A’ levels, but then the band took over.

I put it to her that Prefab Sprout have a very gentle image; innocent. “I don’t think we’re like that,” she replies. “Have you seen us live? You wouldn’t think that if you had. Paddy’s not gentle…”

Paddy’s definitely the driving force behind the band and according to Wendy he’s “a real independent type — likes to be on his own. He does all the writing. He goes away and sits in his little tiny bedroom and writes his songs, records them on his four-track tape recorder and brings them along like that.”

As one Wendy to another, how does she like the name? “Oh. I really like it. I think it’s brilliant that J Ms Barrie made it up. I love Peter Pan, it ‘s one of my favourite stories. I’ve got a copy with all the nice Lucy Atwell illustrations. It’s such a nice kiddies’ story.” When The Sprouts were down in London recording the LP, Steve McQueen, Wendy was pleased to find that their hotel was just round the corner from J M Barrie’s old house.

The LP was produced by Thomas Dolby who heard one of their songs on radio 1’s Round Table and was keen to collaborate. Wendy mentions his perfectionism and you get the impression it ‘s a quality Prefab Sprout share. The words that crop up again and again when you’re listening to Wendy are “lovely” and “nice”: she s always on the lookout for the positive things. Makes a pleasant change, really.