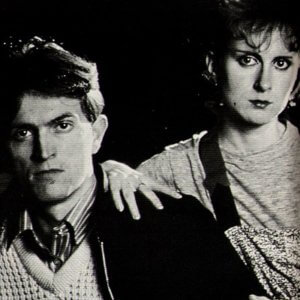 They come from the grey of Newcastle, yet their two albums have given colour to the world of music. Wanting to convey real emotion, they are so good that Thomas Dolby specifically asked to produce their second LP.

You’ll hardly find a single dissenting voice in the rock press. This, only their second album, has got into the blood of the music business insiders, who now speak of Prefab Sprout as one of the best emerging groups on the current music scene.

Paddy McAloon (24 years old), Martin McAloon (21), Wendy Smith (20), and Neil Conti (24) are the four members of Prefab Sprout. Newcastle is their homeland, and it was there Paddy and his brother Martin McAloon began to compose songs. strumming on the guitar between customers at the service station where they worked,before dedicating themselves to music. Picked up by the English CBS label who had heard their music and lyrics in the usual kind of suburban pubs where the band played, Prefab Sprout are gradually ascending a slope full of novelty, unexpected events, interesting things, and sometimes compromise. Amiable and modest, Paddy & Co. had cut an album called “Swoon” which as first albums go was certainly not amongst the best received. Just one song which has been remixed for the new album, “When Love Breaks Down”, was able to stand its ground against others, giving the Prefabs strength and desire to continue on the road they have taken.

Probably “Swoon” came just a little too early, as a period of music was about to flourish that would bring with it music and groups that had previously been regarded as avant garde. 1985 was a year of big changes in music and in style. The advent and success of bands such as Prefab Sprout was the logical consequence, and “Steve McQueen” is a gem, easily assimilated both by the general public and the critics, who as previously mentioned have now accepted the Newcastle foursome with a unanimity that places into the global spotlight an album that has now been declared one of 1985’s most interesting works.

So why not discuss this incredible success with one of the band members, Martin McAloon, who with his brother Paddy created it? That’s what I did, and thanks to the help of CBS Italy, I called Martin in London. As well as being a charming conversationalist, he revealed to me the secrets, hopes and plans of Prefab Sprout, a sprout now blossoming like a snowdrop appearing in the Spring.

Hello Martin! Can you hear me?

The first question that comes to me is about the change you made from your debut album. How did it happen and why?

“In my opinion we didn’t change the way we made music, but rather we redirected our aim towards the point you have to go if you want somehow to succeed in a constructive way, while maintaining a certain quality.”

Staying on the technical side of things, why and how did you choose Thomas Dolby to produce the album?

“To be honest he was the one who chose us. He had already heard us on vinyl when we released our first LP “Swoon”, and since then had always been very impressed by our songs both from the musical point of view and from the lyrics, so one day we received a phone call from Thomas asking us if we would want to allow him to be our producer for the new LP. Needless to say we didn’t believe it, that someone of his calibre would want to work with us, and as you can imagine we said yes.”

You and your brother Paddy used to work in a filling station. What did you do before the idea of Prefab Sprout came into your heads?

“Our favourite pastime was women, but let’s say that between one girl and another there was also time to make up and play what seemed to us to be beautiful songs (laughs). Joking aside, when we’d finished our work we would go and play in loads of different places. We felt we were more like jukeboxes than anything else. All those people who were standing in front of you drinking beer made you feel a little sick after a while.”

But it was an important thing nonetheless because it allowed you to pick up a lot of experience.

“Absolutely. I think now that we can play in front of any sort of audience, punk to metal, new wave to completely indifferent, and we always know how to behave.”

In some magazines you said that your brother Paddy might be one of the best songwriters on the planet. Do you think this is possible, or was this an exaggeration?

“Undoubtedly my brother writes very beautiful lyrics, and as you can imagine they’re all very significant to me, because I was with him and we lived the same emotions. However Neil and Wendy are also often touched by what Paddy writes. So I think Paddy writes about emotions that a very large audience who might listen to our records can understand.”

What are the songs you like most on this album?

“My favourite song is called ‘Horsin’ Around’, but songs like ‘Bonny’, ‘Goodbye Lucille No. 1’ and ‘When the Angels’ are amazing in a similar way.

Is it true that you dedicated “When the Angels” to Marvin Gaye?

“Yes, we wanted to dedicate a piece to Marvin Gaye because we think he was one of the greatest innovators in international pop music. The fact that his skin was black doesn’t mean anything at all, pieces like ‘Let’s Get It On’ will always be part the history of music. His very premature death touched us deeply so the least we could do was to dedicate a song to him.”

On the cover of the record, you’re all seen surrounding a motorbike. Does that have a particular significance, or is it only a record sleeve?”

“No, it’s no coincidence. You have to understand that up until a few years ago what was seen on the cover was the only means of transport Paddy and I could afford (sighs) so it seemed right to celebrate it on the cover or our LP.”

Motorcyclists by chance or passion?

“Above all, it’s a passion. In fact we go as often as we can to watch the hundreds of races that take place in England each year.

I know you will soon be in Italy for some concerts. Is there any last-minute information, can you confirm it?

“To be honest you heard it exactly when I heard it, that is, this morning. I’m not sure why
they didn’t tell me officially, but there’s a good possibility of it “

Do you want to?

“Oh yes! I’ve always been attracted to Italy. Climate, food, the warmth of the people. All the things we love. “

So you see it a bit like being Pizza, sun and sentiment? Don’t you think that’s a bit old-fashioned?

“No, no, hang on. I didn’t mean to say that all you have is food, climate and hospitality. I’m perfectly aware of what’s happening here and how the public responds to foreign products. But logically the things you’re most famous for in the world are those that you and I just listed.

“I’ve really enjoyed this interview. I hope I’ll see you when I come to Italy.”

You can count on it Martin, and now I know you like bikes, I’ll give you a ride on mine soon!