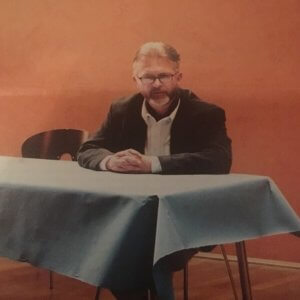 The very first thing I see of him is an umbrella. A strikingly beautiful, very small, collapsible umbrella.

On the octagonal, bud-like knob sits a round, ornate nut made of iron. The sides of the imitation ivory knob alternate from black and white, converging stylishly. The actual umbrella is in a bag-like, matt grey velvet cover. It is lying on the long table of the large conference room in Cologne’s EMI building, now repurposed as a place for interviews. It’s the kind of place where you might also meet a king, just that the gold records on the walls would be better changed for baroque still-lifes.

A new LP on a new label. Paddy McAloon rushes straight from an introductory meeting with an executive of his new record company to do this interview. A new LP with new music? After the transparent, almost disembodied space romance of “Andromeda Heights”, its back to the prairies of the USA. A long way, it seems. But the scenario of “The Gunman And Other Stories” is no less carefully constructed than that of its predecessor.

Paddy McAloon: It might sound a little strange that I say something like this as a writer but the concept and imagery of “The Gunman And Other Stories” refer to the same things as in “Andromeda Heights”. It’s just like giving your movie a new location. I think most pop songs are about the same basic things, they discuss relationships. One of my themes is loss, a sense of the passage of time. You lose things before you can truly grasp them. That’s why I decided to record a version of “The Streets Of Laredo”, I tried to make the song my own because its subject is very close to what I’m writing about.

So the traditional was interwoven with your own composition?

The idea was based on the fact that I only knew “The Streets Of Laredo” from a version that someone had played for me on the guitar, I didn’t know any recordings of the song. But just before we started recording, I started looking for it, if only to confirm no-one else had the rights to the song. Because our producer Tony Visconti had asked David Bowie and he said that he was sure that someone had authorship rights. Anyway, the version I found confirmed “The Streets of Laredo” is traditional. Now I wanted to add my own little part to this anonymous composition. It’s a romantic gesture with the ulterior motive that in a few years someone else will rediscover the song and not know exactly who wrote it and who added which pieces – a kind of attempt to merge with tradition. Normally I don’t do cover versions, but “The Streets Of Laredo” seemed to me in a strange way to reflect modern America. Today you may be a young black man in a gang and before your life really begins you are shot or end up in prison. That was my crazy comparison of the cowboy image with the modern world. So we designed the rhythm track as a shuffling hip-hop or swingbeat version, quite intentionally, because a middle-aged white man was interpreting it. Carlos Alomar is playing on the track and he laughed at this cowboy thing. Cowboys and Puerto Ricans, that just doesn’t go together. So everything adds up to a complex photograph of American mythology from ancient and modern America.

Whose version did you find?

Marty Robbins, who recorded a lot of cowboy songs. Interestingly, he made it into a waltz.

Robbins was also a good rock’n’roller and passable actor. I think Western songs, like the music on your new record, usually have a great affinity for the cinema. Many country musicians cannot do anything with this style.

That’s right, because it interferes with your sense of ​​authenticity. That’s why I always stress that I know very little about country music. Because this accusation of not being pure enough makes me really angry. Most of the music comes from a wide variety of influences. I have some advantages since I’m from the north of England, most Nashville songwriters wouldn’t get far with this cowboy thing, but I can just record it. I don’t care how weird it seems in Nashville – where I’m from, we laugh at something like that and move on to the next one! And… yeah…

The subject is close to his heart. For a moment, his calm voice changes into a rapid staccato, his tone becoming unusually harsh. Paddy McAloon has no coherent image, he sits there in his white shirt, an elegant yet striking neckerchief in the collar. But is beard is still as wild as on the cover of “Steve McQueen”, he knows how to age gracefully and hasn’t trimmed it into a ridiculous designer beard. And as these last few minutes demonstrate, he’s far from the detached master composer many would like to see him as. This is how he is.

With hindsight it’s obvious why we talked so extensively about his cover version. With “He’ll Have To Go” on the B-side of the 1984 single “Don’t Sing”, it is, as far as I know, the only cover in the band’s history. “Don’t Sing” could itself tell the pre-story of “Streets of Laredo”. In fact he condenses many basic ideas about his work into this song, such as dealing with a history he perceives as living, and the idea of songwriters as storytellers, distanced from the one to one authenticity of many rock singer songwriters.

Paddy McAloon: It’s not that you want to be impersonal, but you also don’t want the person in “Don’t Sing” to be Paddy McAloon, you want him as the narrator of the story.

Does the narrator live in a dream?

I live in two completely contradictory worlds, one is completely imaginative, here I just think what I can do next, move the individual forms and fragments and try to make a whole piece of music out of them. Especially since I started to go blind. You know, I have serious eye problems and have had multiple operations, I live in a world that can be highly imaginative and then completely practical again. In one I tinker with my songs, my children, in the other I’m completely unable to do anything other than listen to music after an operation.

Paddy McAloon sits with his back to the fully glazed window side of the room, not noticing how much the sky has darkened during the last five minutes. Suddenly a bright flash pulverises the air. It is very close, paralyses the traffic lights of the surrounding streets – the thunder follows with a corresponding force. The bang hits Paddy McAloon completely unawares. He flinches: “Wow! That was very close. That was… fantastic.”

There’s nothing more we can do in this world than to marshall what resources we have from direct and indirect experiences. As long as we can marvel at our perceptions, we progress, and therefore so does everything else. Little things. Details.

The rain is pattering on the pane, the umbrella lies untroubled on the table. I’m sure it will fulfill it’s primary function when it matters. For the moment it just draws my gaze now and then. Did he get it as a gift? I don’t ask, but I can imagine how he selects an umbrella, carefully and at length. It’s good to know that someone has that rare grasp of what really matters.