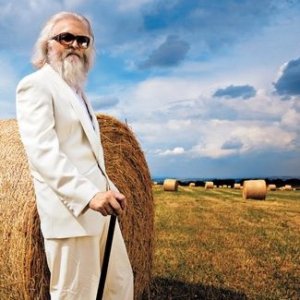 He doesn’t have hit singles. Nor does he fill stadiums. But nevertheless, with his band Prefab Sprout he changed pop music. For many years he has given no interviews, but now he has finally made a new record. A visit to meet Paddy McAloon.

And then the plane is delayed, the train for the connection is long gone, the directions from the station don’t match the city and the actual streets, and anyway England has too many roundabouts, too much traffic, the policeman who helps speaks in with an inpenetrable dialect, the hotel doesn’t have an entry facing the street, but at the back, and how on earth are you supposed to know that, and why is it still so warm here in September? And so here I am standing in the lobby of the Marriott in Durham, completely out of breath, red-faced, but ready, and finally in front of one of the last great mysteries of English pop music.

Paddy McAloon is wearing round blue sunglasses over his glasses. And a dark blue velvet suit. And a long white beard and long white hair. He looks like Dumbledore from Las Vegas. He hasn’t had a real hit with his band Prefab Sprout for thirty years, he doesn’t fill stadiums. Eventually he gave up playing concerts, but one album by one, he transformed pop music.

And now he has a new record, and is suddenly available to speak to the press, which has come from all corners of the world to the North of England, where many very different kinds of pop singers were born: Bryan Ferry, Sting, Morrissey of the Smiths.

But none of them make pop music quite like Paddy McAloon, intelligent, dazzling, and bordering on kitsch – indeed very often even going beyond. He wrote smooth, soulful, elegant, cryptic hymns, in truth too glamorous for the twists and turns of medieval Durham, where McAloon has always lived, but that’s not what it’s all about, it’s all about the longing for a place that shines brighter and more clearly, a place you can never reach, except in the four minutes of his songs.

They have titles like “Cars and Girls”, “Electric Guitars”, “Cowboy Dreams” or “Andromeda Heights”. In fact it’s enough just to hear the titles and not the music, for some people that’s already too much. And that’s the other truth about Paddy McAloon: he divides the world into people who love or hate him, rather like Woody Allen or Bayern Munich.

But at the moment, Paddy McAloon is only concerned that I get something cold to drink: “I’ve only been driven over from Consett,” he says to the waiter, whom he has thanked for the water about eight times, “but this gentleman here has just flown in from Germany.” And so it goes on and with the utmost courtesy, Paddy McAloon stops himself when he interrupts me, he laughs, especially about himself, he smiles and reflects again, and at the end of the conversation he even asks if everything was OK. With every minute that passes one wonders where his reputation as an inaccessible, difficult, hermit came from.

On the other hand, McAloon has given very few interviews over the years, just for Swedish Television and a scattering of English journalists. He has withdrawn completely from the public eye. “I see clearly that people think I’m a figure of mystery,” says Paddy McAloon, “I get that from a lot of people. I don’t want to spoil anything, but if you only knew how boring I am!”

That is somewhat capricious. Paddy McAloon has released nine albums since “Swoon” in 1984, the breaks between them have been getting longer and longer over time, but it was not really like that, because McAloon was working on new projects during those periods, thirty or forty of them : a concept album about Michael Jackson, another called “Jeff & Isolde”, a “Symphony of Snowflakes”, a duet for himself and Barbra Streisand. And now, in the early fall of 2013, there’s finally a new record, thirteen years after the last, it is to be released on Friday. It’s called “Crimson / Red” and is as ingenious, crazy, and sentimental as anything Paddy McAloon has written since “Steve McQueen”, his masterpiece of 1985.

Does he sometimes think of his fans waiting for a sign of life, who have to listen to the old stuff again and again waiting until there’s something new?

“Rarely,” McAloon replies,“it’s almost unreal to me, it’s very, very, very, very weird.” He genuinely says that four times. “I think about other songwriters and wonder if they know what their songs mean to me. So I understand how that works in reverse but I don’t think about it often.”

He uses an old Atari, he likes Katy Perry, his kids go online, but he stays away from it, even staying away from London, although this is typical of Northerners. “Above all, I live here,” McAloon says, putting his hand on his chest. “I’m not writing like a Hip-Hop artist using what they sound like on the streets right now. I find it hard to get that right. It’s more like you hope that your own voice as a writer is quite strong.”

That’s why you don’t necessarily associate the songs of Prefab Sprout with landscapes or particular years, but rather with emotional states. This makes the music no less associative, but it is timeless. If McAloon was a director, it would be Terrence Malick, terrible and irritating to some, but a revelation for the others waiting for new works; a bit like comets – they’re about as likely to appear after all. Were he a writer, one would call him a writer’s writer, admired by other writers who are more successful than him, but who walk in his footsteps. Coldplay for example. Their huge hit “Viva la Vida”, as McAloon says himself, sounds almost as if he had written it.

And actually Paddy McAloon is a writer, if only for a few lines, which he sings with a voice that has softened over the years, so that he sounds younger today at the age of 56 than he did in his mid twenties: “But you’re only as good as the last great thing you did,” he sang back then, but it’s best not to start with the quotes, it won’t end well.

“The Brooklyn Bridge stretches below me / A million souls all dying to know me.”

And one from the new record:

“Adolescence what’s it like? / It’s a psychedelic motorbike / You smash it up ten times a day / then you walk away. “

This song, “Adolescence”, dances in, electronically, then the chorus flutters away behind it, takes off, jubilant:

It’s really hard to stop with the quotes.

“I like it when it rhymes,” says McAloon. “I’m happy with very simple things. There’s a Bowie story about what Lennon once said to him: ‘Say what you mean and put a backbeat to it’. I don’t always know what I’m wanting to say. I want to discover it. I like to start with something that is true and then figure it out, without being banal.”

Back in the eighties Prefab Sprout was a real, four-piece band. At some point only Paddy’s brother Martin remained, but now McAloon does everything by himself. He had the help of just one solitary producer to make “Crimson / Red”. In the past twenty years, McAloon has been repeatedly very ill, first the eyes, the retina, then on the ears, tinnitus, he is still incapable of hearing some frequencies. Then he had cataracts, but he had an operation to remove them. “I am okay,” he says today. “The last years have put a dampener on my life but I am alright.”

Anyone who wants to get an idea of what life for McAloon was like when he was almost blind should listen to his project “I Trawl the Megahertz,” for which he recorded voices from the radio, at that time his connection to the world, and wrote orchestral music: It’s the voices of recently divorced people, of people who have been hit hard and wrestling with what’s happened to them. You hear McAloon himself singing on the record only once. “I’m lost,” he sings, “Yes, I am lost / I’ll grow a long and silver beard / And let it reach my knees.”

And now he sits, with his silvery, long beard that has not quite made it to his knees, talking about how his songs always lived on from hope, from waiting, twenty years of waiting, of wishes that might be fulfilled, of the appetite that sustains you more than it satisfies, of a longing that is better forever unfulfilled, because that keeps you energised. Of imagining being someone else, knowing that it will never happen. The songs of these lights of the Northern firmament, Prefab Sprout, look constantly to America, here a banjo, there a harmonica, they tell of Sinatra, Jesse James and of Bruce Springsteen, that great escapee from the everyday life, but who always turned around and came back. “Guess this world needs its dreamers”, Paddy McAloon once sang about him “May they never wake up.”

Exactly. After all, the world needs such people so that it doesn’t get bored, and also so it understands itself a little better. “It’s this Gatsby thing”, says Paddy McAloon. “If I could just do this! It’s just around the corner! But when you do it it’s not so thrilling any more. I’ve been thinking about that a lot quite recently – what exactly do you replace that with? Or do you somehow just grow up with it and accept things? Which is probably what you should do.”

You don’t have to do either. You just need Prefab Sprout records.

Special thanks to Tobias for providing the original English quotes.