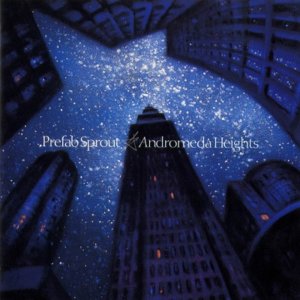 The Gentleman of Pop – Meeting the Leader of Prefab Sprout

Paddy McAloon never enjoyed playing concerts with his group Prefab Sprout. But he’s more generous in his interviews. And as this great pop aficionado is also the kind of gentleman you meet only too rarely in show business, interviewing him isn’t hard work at all. It’s certainly the case that he owes us some explanations about his seven year absence from recording, with the exception of the compilation “The Best Of: A Life of Surprises”, released in 1992.

“It’s funny, because I always feel I have to justify myself in this job,” he says, plunging a sugar cube into his cup of tea. “The public hasn’t had a new Prefab Sprout studio album since ‘Jordan: The Comeback’ in 1990. But in fact I’ve never stopped working. Song-writing has never been a job for me, I can’t live without composing. What takes me a long time is making a consistent and coherent record. But I have dozens of songs in stock, some in an embryonic state, others finished and sleeping on DAT tapes in my studio.”

Prefab Sprout is one of the great mysteries of popular music, their pop compositions having always had rave reviews, but without resulting in astronomical sales. “Our success must be judged artistically and not in terms of sales. We’re lucky to make a living from our music, a good living… To be frank I have nothing to complain about. The people who discovered our first album ‘Swoon’ have remained loyal to Prefab Sprout, and from time to time, for example with ‘The King of Rock ‘n’ Roll’, ‘Cars and Girls’, or ‘When Love Breaks Down’, we managed to carve a path for ourselves onto the airwaves. But our goal has never been to play stadiums.”

“Andromeda Heights”, the band’s new album, picks up the story where “Jordan: The Comeback” ended. The intelligent pop of the compositions rubs shoulders with the influence of the Beatles, British reserve, and a desire to envelop the melodies in as many instruments as possible without ever stifling them.

“On a practical level, it was a real headache. The album was recorded in my own studio in the basement of my house, and I’d originally built it to work on demo’s. But I felt so comfortable in this environment that I wanted to make the whole album there. We had to push the furniture back to allow all the musicians to take their place in the studio. I never thought so many of us would be able to fit into such a small space.”

Even though he rejects the star system, Paddy McAloon is nonetheless fascinated by this universe. At least that’s what he sings about in “Electric Guitars” (“I dreamed we were rock stars”) and “Avenue Of Stars”

“In cinema or in rock, there is an unreal side that emerges from all these stars. Even for me, as someone who is in what might be called the trade, I sometimes have a hard time imagining how all of these stars live. At the end of the day they have the same day-to-day problems as the rest of us, but I have never dreamed of being part of this world. That said, the lyrics of ‘Electric Guitars’ should be understood as a child’s thoughts, like a little girl who wants to be a air stewardess or a nurse. I love family life and the countryside to want to put myself into the skin of a rock star. Apart from my friends, nobody recognises me in the street. And that’s the way I like it…”